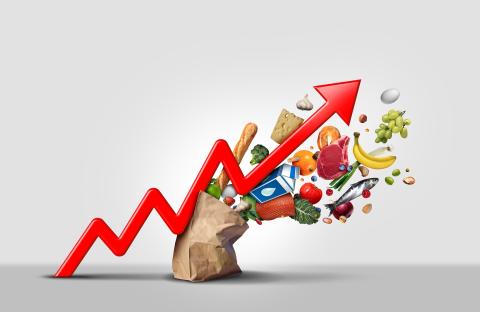 The annual rate of inflation hit 6.7% in March, the fastest year-over-year increase in the consumer price index in over 31 years, Statistics Canada said Wednesday.

The increase compared with a gain of 5.7% in February, and was the highest reading since inflation hit 6.9%in January 1991 when the GST was introduced.

Fuelling much of the increase in March were higher prices at the pumps as gasoline prices rose 39.8% compared with the same month one year earlier.

Statistics Canada said the consumer price index would have been up 5.5% year-over-year if it had excluded gasoline from its calculations, suggesting far broader price pressures.

The agency said prices were driven higher in March on the back of the country's hot housing market, supply-chain constraints and the war in Ukraine that has affected prices for oil and food.

Russia's invasion of Ukraine was also blamed for jumps in pasta prices and cereal, the latter rising at the fastest annual pace since June 1990. Russia and Ukraine are major wheat exporters.

As prices rose faster on an annual basis in March, average hourly wages were up by 3.4%, still far behind inflation and eating into consumers' purchasing power across income levels, said BMO chief economist Douglas Porter.

"This is not sustainable to have a gap of more than three percentage points between inflation and wages," he said.

"Either inflation has got to come down fast, or wages have got to rise up to to meet if not exceed inflation in fairly short order, and I think I think it's going to be a little bit of both."

The growing rate of inflation has spooked economists and central bankers amid signs that Canadians are beginning to expect inflation to stay higher for longer.

Last week, the Bank of Canada increased its key policy rate by half a percentage point, raising the benchmark interest rate to one per cent with warnings that more rate hikes are to come this year.

"The Bank of Canada has been behind the curve and they've recognized that and now they have to catch up," Desjardins chief economist Jimmy Jean said.

"That's why they went out with that 50 basis-point rate hike, and we think they have another one in store for the next meeting."

But the dampening effect of higher interest rates won't be immediate.

"It does take time for those interest rate hikes to have an effect on the economy and on inflation," he said.

The average of the three core measures of inflation, which are considered better gauges of underlying price pressures and closely tracked by the Bank of Canada, was 3.77% in March. That the highest recorded since March 1991 and up from the 3.53%  in February.