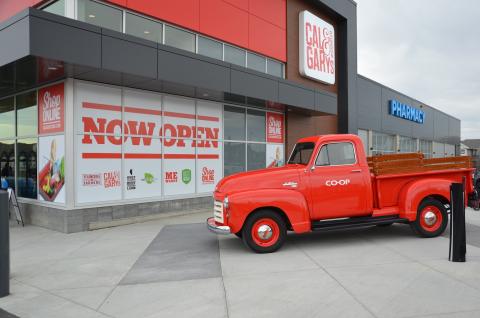 Calgary Co-op has opened a new store in Sage Hill, a residential neighbourhood in Calgary. It’s the retailer’s first new store in five years and coincides with its 65th anniversary.

The location is in a new development called Sage Hill Quarter, which features a mix of retail and condominiums. The new Calgary Co-op features full-service bakery, deli and meat departments, a floral department, a health and beauty department, a pharmacy, and the Natural Choice section featuring natural products and supplements. The store is loaded with 2,400 local products including Calgary Co-op’s four private-label brands: Cal & Gary’s, Cal & Gary’s Organics, Founders & Farmers and Only Alberta meats. There’s also a variety of community gathering spaces.

At 30,000 square feet, the store is smaller than Calgary Co-op’s typical footprint, which ranges from 45,000 to 65,000 square feet. However CEO Ken Keelor says, “It is incredible that we have been able to plug in all the wonderful products and services members have been used to... You can do a full shop and I don’t think you’ll miss anything.”

There’s a big focus on being more environmentally friendly, with LED lighting that uses 80% less energy and lasts 50% longer than traditional lighting. The co-op upgraded its refrigeration systems to make them more energy efficient thereby reducing greenhouse emissions, and repurposed some equipment from other locations rather than buying new. There’s also an electric vehicle charging station that can charge two vehicles at the same time.

In terms of look and feel, the store features a vibrant colour palette that was introduced when Calgary Co-op opened its Auburn Bay store in 2016. “That’s the last food store we opened and that was built off a new long-term strategy, which was all about lighter and brighter and appealing to younger customers,” says Keelor. “We wanted to create a dynamic, welcoming shopping experience with each department in its own colour palette.”

As for the five-year pause on new store openings, Keelor explains that the city of Calgary experienced difficult socio-economic times over the last few years. In 2015, Calgary Co-op developed a new long-term strategy with a number of key elements, including differentiated product leadership, asset optimization, inspired team members, and improving cost efficiencies. “What we’ve been doing for the last few years is building strategy and laying the foundation in terms of improving the fundamentals,” says Keelor.

Calgary Co-op has been refurbishing and renovating select locations, including its Dalhousie and Brenthood stores. It also has new store openings in the works, including Marda Loop and Springbank Hill.

The new Sage Hill Quarter development also features Calgary Co-op’s Wine Spirits Beer and Gas Station. “Sage Hill is a young and vibrant neighbourhood,” says Keelor. “It’s been slow building up, but [the food store] is going to be the anchor for the neighbourhood and it’s going to be a real community destination... The community can now shop for food, liquor, gas and pharmacy, and we’re going to be really focused on supporting the neighbourhood.”