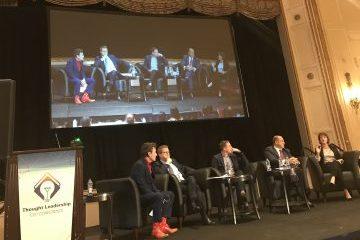 We often hear the industry is going through unprecedented change and most of these conversations revolve around technology and its impact on foot traffic. These are the changes that make headlines.

But it's a change of mindset, a change in routine, a change in corporate culture and even a change in lexicon that can elicit profound results, according to four industry CEOs who took part in a panel discussion at Canadians Grocer's annual Thought Leadership conference in Toronto on Monday.

When discussing times of change and the importance of great leadership, Chapman asked Medline to explain why he banned the word "vendor" from the organization. It was, he said, to change how the company views the relationship between the two parties.

"I just think there’s been, especially on our side of retail, a pejorative use of the word 'vendor,'" he said. "We found if you change the way you talk about things it sends a message there will be a different way to do things. 'Vendor' sounds adversarial. We’re supplier partners and we want to be the best supplier a partner can be."

Today's work culture is one that has employees doing more for less, said Chapman, before asking Tappenden, how organizations can create a culture where employees are resilient and accepting of change.

Tappenden said he wants Walmart to be free of bureaucracy because it slows everything down and can turn some team members into "energy vampires."

"It’s upon us to take out the bureaucracy, empower people to take calculated risks," he said. "If you do that you create the ability for big organizations to be nimble."

As concern grows over climate change, more consumers are turning to the eco-conscious brands and companies who are transparent in their efforts to reduce their carbon footprint, food waste and more. Chapman asked the panel if the future of business is to have a purpose that's greater than profit.

"The sweet spot for a company like Kruger is where do you have the connection point between profit, people and the planet. There is a space there where that all works quite well," said Bianco. "The fact you are reducing energy, reducing water, reducing packaging, reducing costs, it’s great for the environment but also cost effective."

Added Goldberg: "If you're talking about waste reduction or healthy eating, there’s a journey to get there and it’s not going to happen over night, and as long as you're true to that journey and showing progress it's okay."

While change is afoot across several areas of business, Medline cautioned against moving away from your brand's core mission to chase the latest trend or fad—a change that could be detrimental if trying to be everything to everyone.

"I see a lot of retailers chasing things," he said. "Be true to what you can do and once in a while you need to let someone else have the market share."