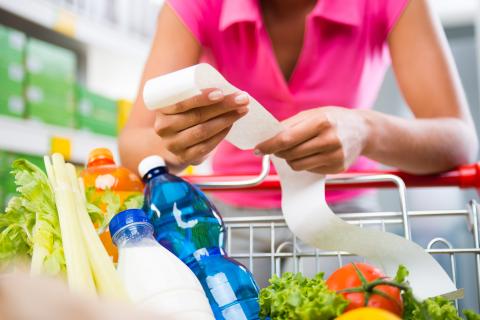 Rising food prices are poised to have a “significant impact” on shopper behaviour for the rest of the year, says a new survey from research firm Field Agent Canada.

Conducted between Aug. 24 and Aug. 29, the online survey of 1,042 shoppers reveals that the overwhelming majority of Canadians (85%) have noticed grocery price increases in the past month, with more than three-quarters (78%) saying they are moderately or extremely concerned about the increases.

READ: Food prices are about to make the largest jump in history

According to the most recent Statistics Canada data, food is the third highest expense for Canadian households behind shelter and transportation. The average Canadian household spent $10,311 on food in 2019, with $7,356 of that going towards food purchased from stores. Approximately one-fifth of that total ($1,481) was to meat products.

Field Agent general manager Jeff Doucette says his company launched the survey in response to clients in the food and beverage sector noting that commodity prices were soaring, and fretting about how consumers would react to those costs being passed on to them.

Asked how they plan to alter their shopping habits in response to higher prices, 82% of respondents say they plan to stock up on items that are on sale, a practice that has become commonplace during the pandemic.

“People are used to doing it, and their go-to weapon to hedge against inflation is to buy stuff when it’s on sale,” said Doucette. “This whole idea of a stockpile closet or a [dedicated section] of your basement is becoming more of a reality, especially on high usage items.”

Sixty per cent of respondents say they will use more coupons, while 55% say they will purchase some products less often. Other popular responses included switching to lower price brands (53%), buying fewer premium priced brands (52%) and purchasing more store brand products (45%).

Nearly one-third of respondents (32%) say they will consider switching retailers, which Doucette says is a “pretty significant” finding. Conventional grocers were given “a bit of a free pass” at the outset of the pandemic, says Doucette, because consumers tended to prioritize convenience and expedience over pricing.

READ: Has COVID forever changed our relationship with food?

“In light of these price increases, that’s where conventional grocers are going to have a bit of volume pressure,” he says. “They grew share during the early days of the pandemic, but as inflation increases, I think that’s a threat to conventional [grocers], and definitely an upside for the discounters, like No Frills.”

Two-thirds of respondents say candy/chocolates is the item they will purchase less often because of price increases, followed by soft drinks (61%), salty snacks (60%), prepared foods/deli (56%) and frozen meals (53%).

Asked to name the retailer they trust most to offer the lowest price for groceries, 29% of respondents say No Frills/Maxi, followed by Real Canadian Superstore (22%), Walmart Canada (20%) and Costco (14%).