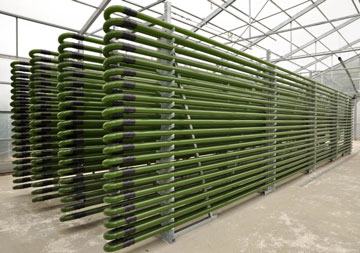 When it comes to industry, fossil fuels still run the show. Even though clean energy sources such as solar, wind and hydroelectric energy have become more prevalent, industrial systems and most means of transportation still rely on coal and oil. For the sake of the planet, it’s imperative to reduce our reliance on these non-renewable, carbon-producing fuels.

The solution? How about algae—yes, the green slimy stuff that floats on the surface of ponds and grows on the inside of your aquarium.

Microalgae, which are composed of microscopic single-celled organisms, have the ability to take in sunlight and convert it to energy via photosynthesis. Some strains of these microorganisms produce oils, and these oils can be converted into fuels for industry and for cars, trucks, trains and planes. Another bonus: microalgae absorb carbon dioxide and turn it into oxygen—essentially, these critters clean the air.

Microalgae can be grown and harvested in open ponds, especially in sunny parts of the world. In order to maximize crops, however, water temperature has to be controlled, which can be difficult. Vertical growth, or closed loop production, is another system where microalgae are grown in clear plastic bags that are stacked outside and protected from the elements. But the most popular growing system is to use close-tank bioreactor plants, where the microorganisms are grown indoors in large drums. In these near perfect conditions, microalgae are sometimes harvested every day.

Fuel made from microalgae is sustainable, clean, portable and renewable, which makes it very attractive to the energy industry. This advanced biofuel also has an advantage over corn-based biofuels. The U.S. Department of Energy says microalgae can produce up to 60 times more oil per acre than plants grown on land.

Not only can microalgae be continuously and sustainably produced, the microorganisms can be stored and transported for future use. They also thrive in water sources that are unsuitable for traditional agriculture, such as brackish water or wastewater. And after oil extraction, the remaining algal biomass can be dried and used for fuel in various industry applications.

With so many advantages, it's a wonder that more airplanes, trucks and cars aren't running on the advanced biofuel today. Here’s the challenge: harvesting microalgae and transforming it into biofuel is currently very expensive. When companies can grow the right strains of algae on a large scale and at a good price, the commercialization of this sustainable biofuel will be well on its way.

To learn more about the production of algae products in Canada, visit Pond Technologies. Led by Peter Howard, the Carbon Cycler team is producing biodiesel, solid biofuel and other algae products.