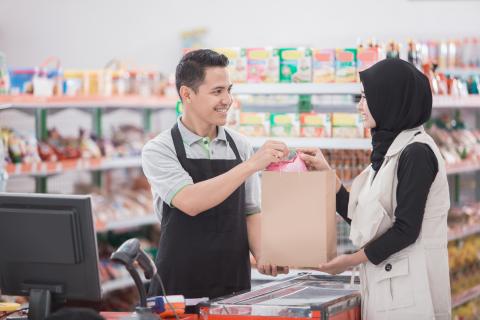 Halal shoppers are much more likely to shop online than the average Canadian, and it’s important for halal brands to have a presence on e-commerce platforms in order to meet the needs of the growing consumer segment.

That’s among the conclusions of Nourish Food Marketing’s annual Halal Shopper Study, which is based on interviews with 1,000 shoppers who are Muslim or regularly purchase halal food. The study found that 72% of respondents do their shopping online, compared to 53% of the general population.

That shows a gap that retailers can exploit to better service halal shoppers, the study says.The Halal Monitoring Authority pegs the value of Canada’s halal food market at $1 billion, and says it is becoming increasingly important as the country’s Muslim population grows by 13% a year.

The Nourish Food Marketing study says with shelf space limited at retail, both grocery stores and manufacturers can benefit from the emergence of direct-to-consumer and online shopping channels to get halal products into their customers' hands faster and more efficiently.

“[This is] a chance for retailers to have a different online assortment and potentially put more variety online versus in their store, where they lack the shelf space,” says Salima Jivraj, account director and multicultural lead at Nourish Food Marketing.

The emerging halal brand The Meathead Store is a perfect example of a company that has innovated to meet the needs of today’s halal consumers, says Jivraj. While it has a single brick-and-mortar location, it also has a robust online platform.

Meathead has also innovated on product assortment, moving beyond typical halal foods including shawarma and chicken nuggets to offer items such as tomahawk steaks, wagyu burgers and beef jerky.

Half of the survey respondents rated Canada’s major food companies as either “good” or “very good” at meeting their need for halal products, up from 32% in 2019 and the highest total since 2014. While noting that the increase represents a “step in the right direction,” Nourish also suggests a need for improvement.

“There’s still that 50% that is either somewhat satisfied or not satisfied, and that’s still a big number,” says Jivraj. “A lot of it comes down to price and accessibility.” Respondents reported finding a great halal product in a big-box retailer one week, for example, only to discover it wasn’t there on their next trip.” Jivraj says that established players like Maple Leaf Foods’ Mina Halal and Maple Lodge Farms’ Zabiha Halal are the dominant companies in the space, but face increased competition from brands like Meathead and Prizm Foods.

Among retailers, Iqbal Halal Foods, Walmart and Costco control nearly one-third of Ontario’s halal market. Iqbal is a pioneer in the halal space, though Costco has been making significant inroads among the Muslim community, particularly as people did more stock-up trips because of the pandemic.