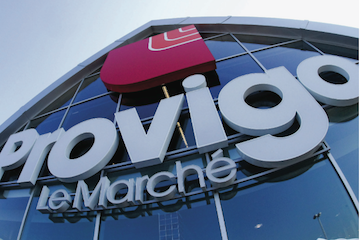 When Toronto-based Loblaw took over Quebec’s Provigo grocery chain in a controversial deal valued at $1.56 billion in 1998, it moved quickly to introduce Loblaws stores into the province.

Flash forward to 2007: After years of neglecting the Provigo brand, Loblaw depreciated the value of its Provigo assets by $900 million. Former grocery executives began grumbling that Loblaw’s Toronto-centric management of its Quebec operations had been an unqualified disaster.

But last year, Loblaw decided to abandon its namesake brand in Quebec and convert its remaining Loblaw stores into Provigos. Today, the Loblaws banner is virtually gone from Quebec.

Quebec management has been given free rein to run Provigo, echoing the autonomy Sobeys has long given its IGA subsidiary in Quebec.

In place of Provigo is Provigo Le Marché—a concept that borrows heavily from the Loblaw concept first introduced at its Maple Leaf Gardens store in Toronto in 2011. Elements include everything from a wall of cheese to beef aged in store.

Introduced in Quebec in 2013, the Provigo Le Marché concept echoes that design, but adds “only in Quebec” elements, such as hundreds of varieties of Quebec cheese.

Last year, Dandoy, senior vice-president, operations, market division (Provigo and Loblaws Quebec), explained the change as a “return to our DNA. Provigo is really a great Quebec banner and it reflects who we are.”

Having only one banner and one message allows Provigo to unify its marketing and consolidate its position in Quebec, he said. (Provigo declined several interview requests with Dandoy.)

The impact of moving from the Loblaw to the Provigo banner has been “only positive,” Loblaw president Galen Weston told analysts during an early May conference call to discuss quarterly results.

“I think to be able to exit the Loblaw brand in Quebec is an enormous step in the right direction for us. It just allows us to focus our marketing efforts on two specific brand names. Provigo is so much stronger in the consumers’ mind then it was just three or four years ago.”

Observers say the jury is out on how well Provigo is doing, but after years of little financial and marketing support, the brand at least has a fighting chance of succeeding against ferocious competition.

The shift back to Provigo is “very wise,” says Éric Blais, president of Toronto-based Headspace Marketing, which often explains the Quebec market to marketers in Toronto.

“It took awhile to get there, but eventually the powers in Toronto realized that (Loblaw) was not necessarily going to take off in that market.” Provigo Le Marché, he says, has “given a shot in the arm to the Provigo brand.”

Founded in 1969 by four business partners, Provigo quickly began acquiring other supermarket chains, including Dionne in 1977, Dominion and Raymond in 1979, A&P Montreal in 1984 and some Steinberg stores in 1992. By the early 1990s, Provigo had emerged as Quebec’s largest grocer.

Gaétan Frigon, a former exec in Quebec food chains and ex-president of Quebec’s liquor board, described the late 1990s acquisition of Provigo by Loblaw as a “disaster signed Loblaw” in a 2011 column in Montreal’s La Presse.

“The history of Provigo could not stop in the 1990s,” Dandoy told the Quebec City daily Le Soileil in 2013. “Our goal is to reconquer the heart of Quebecers.”

In a subsequent column, Frigon noted “it’s obvious that Provigo wants to become a major player again who should recoup at least a part of what it lost in the last 20 years.”

However, Provigo doesn’t just have Metro and IGA to worry about these days, Frigon noted in a 2014 column. Giants like Walmart and Costco have grabbed market share and will continue to do so, he says. While there probably won’t be deaths on the grocery front in Quebec in the next 10 years, there will be collateral damage.

She calls the fish department “more than visually breathtaking,” noting “I can’t remember the last time, if ever, that I saw fresh octopus in a supermarket outside of Adonis (a Middle Eastern-style grocer now majority-owned by Metro).”

While the sushi offering needs work, the aged beef display was “the most impressive array of dry ham and sausages I’ve seen outside a specialty boutique.”

However, Harold Simpkins hasn’t noticed much of a difference between Provigo Le Marché and the Loblaws store he used to shop in.

“The basic format, selection and prices in the store, they’re all the same,” says Simpkins, a senior lecturer in marketing at the John Molson School of Business at Concordia University. But he notes the transition from Loblaw to Provigo Le Marché still makes some sense.

“When you run two brands congruently, it has a tremendous impact on costs. All of your merchandising material, the graphics and the flyers have to be completely differently branded.”

“An increasing number of people prefer local,” adds Simpkins. “Not just for nationalistic reasons, but for sustainability reasons.” Plus, buying local is a lot easier to do if your management is locally-based and not based in another province, he says.