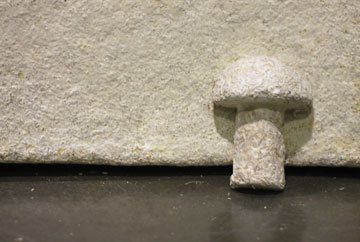 According to the World Economic Forum, it is estimated that, by 2050, there will be more plastic in the ocean than fish. So when it comes to consumer packaged goods, sustainable packaging is more important than ever. Most packaging, as we know, is discarded after the product is opened and used, which leads to a lot of waste. But what if packaging was developed that could meet the needs of manufacturers but could also break down in a landfill?

One of the best ways to improve sustainability practices for packaging is to use plant-based renewable materials instead of non-degradable plastics. Here are three new types of sustainable packaging that are on the right track.

Mushroom packaging
Ecovative is a New York-based biomaterials company that provides sustainable alternatives to packaging plastics and polystyrene foams by using a mycelium technology. Mycelium or “nature’s glue” is a type of mushroom fungus that grows in a mass of branched fibres and attaches itself to what surface it’s growing on. Ecovative grows mycelium around clean agricultural waste such as corn stalks or husks. The fungus fibres bind the waste together to form a solid mould, which is then dried to prevent it from growing further. This mushroom packaging or “MycoFoam” can be grown to exactly fit the product to be packaged or insulated, effectively eliminating the need for plastic foams like polystyrene, which take thousands of years to decompose. Mycelium packaging, on the other hand, biodegrades within weeks (but it doesn't decompose unless exposed to other living organisms). To compost mushroom packaging, just break it apart and place in soil or in the elements. MycoFoam is not only environmentally friendly, it’s cost-competitive with polystyrene, making it budget friendly, too. Retail giant Ikea recently announced that it intends to use Ecovative’s MycoFoam to insulate the contents of its packages in the near future.

Bio-based bottles
Danone Wave and Nestlé Waters, the world’s two largest bottled water companies, launched NaturALL Bottle Alliance with California startup Origin Materials in March 2017. The aim? To develop 100% bio-based bottles. The bottles will be lightweight, transparent, recyclable and all-around better for the environment. The project is using biomass feedstocks such as cardboard, sawdust and woodchips to manufacture the bottles, which means that no resources are diverted from food production for human or animal consumption. Other potential feedstocks could include rice hulls, straw and agricultural residue. Danone Wave and Nestlé Waters are committed to sustainable practices. The companies hope to produce at least 75% bio-based polyethylene terephthalate bottles by 2020 before scaling up to 95% in 2022.

Milk-based packaging
Edible packaging is a brilliant way to eliminate packaging waste altogether. Research leader Peggy Tomasula and her colleagues at the U.S. Department of Agriculture are developing an edible food wrap. The clear and pliable packaging is made from the protein casein, found in milk. Milkwraps could eventually replace the plastic films that currently protect refrigerated perishables. Visually similar to store-bought plastic wrap but less stretchy, milkwraps are totally edible and biodegradable, not to mention more effective than current edible packaging materials made from starch. Casein films are excellent at blocking oxygen (up to 500 times better than plastic) and protecting food from light, which helps prevent food spoilage. It’s exciting stuff: imagine a package of dried soup, oatmeal or instant coffee that you could throw into hot water, package and all. Casein films could also be developed with flavours or vitamins and minerals to make them functional and more enticing to consumers.