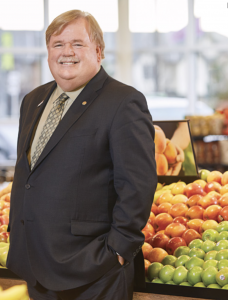 Today he's at the very top of Overwaitea's Save-On-Foods, but Darrell Jones started at the very bottom: bagging groceries at the Overwaitea store in Cranbrook, B.C., more than 40 years ago while he was still in high school.

After graduation in 1978, Jones was considering attending the University of British Columbia to become a teacher when he was offered a full-time job at the Port Coquitlam store. He decided to give the grocery business a try for a year or two. “And I never looked back,” he says. Jones excelled within Overwaitea, taking a series of progressively senior positions and joining the senior management team 17 years ago. He was eventually promoted to president in 2012.

There were other opportunities and offers along the way, usually with a larger salary attached. But most of them were in the east and, his deepening loyalty to Overwaitea aside, his roots were on the West Coast and his family was happy there.

“I don’t think there’s been a day in the last 40 years that I haven’t looked forward to coming to work,” he says. “Not every day was perfect ... but there was never a day I thought about leaving the grocery business. I never considered leaving the company.”

Jones credits good luck for his successes, but says the core values that have guided him throughout his career enabled him to take advantage of the lucky breaks when they came.

Personal integrity, hard work, a passion for the business, and a plan to succeed were all important, he says, as was a willingness to give back. “You have to make sure that whatever good happens to you, that you give that much good in return.”

In many ways, the grocery business looks very different today from when Jones was bagging groceries in Cranbrook. The pace of change in recent years, in particular, is incomparable and customers are certainly more interested in their food and its nutritional value—organics, hormone free and grass fed, for example—which makes the job more complex.

“When I started, beef was just beef,” he says. But at its essence, the relationship between consumer and grocer is the same. “The customers that come through your door are not much different than they were when they came through the door in 1976,” he says. “They are looking for people to give them good food, healthy food at good value. And they want to feel good about the place they purchase that food.”