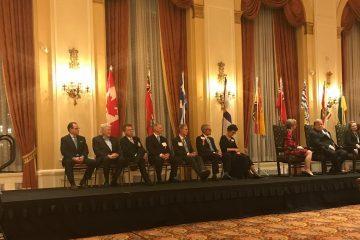 Three golden greats were given the grocery industry's highest honour during a ceremony at the Fairmont Royal York Hotel in Toronto Monday night.

Nestlé Canada CEO Shelley Martin, Retail Council of Canada president Diane J. Brisebois and Darrell Jones, president of Save-On-Foods, were this year's recipients of the Golden Pencil award, which recognizes leaders for having made a significant contribution to the Canadian food industry during their career.

Martin joined Nestlé Canada in 1990 and over the course of her career has managed the coffee/beverage, petcare and confectionery businesses. In 2012 she combined the frozen businesses (meals, pizza and ice cream) and became president of the frozen division. In 2013 she was named president and CEO.

In her acceptance speech, Martin encouraged the audience to recognize the opportunity they have to work together to tackle such topics as talent retention, food security and the health and wellness of Canadians.

"I know we have the ability to make the change ... and we touch every Canadian there is so we can tackle this as an individual company, we can tackle this as individual clusters of organizations but the magic is when we all come together to be able to do things in a different way," she said. "Just think of what can happen if we were to take our strengths and our potential to step into the responsibilities to be able to make a difference"

Brisebois—who has spearheaded the Retail Council of Canada since 1995 and serves on a number of trade boards including the School of Retail at Ryerson University and the David Sobey Centre for Innovation in Retailing—told the audience it felt strange to receive an award for something she loves to do. "I, and the team at RCC, are honoured to be given the privilege to speak for and represent such an amazing group of people and such a great industry," she said.

Save-On-Foods' Jones, meanwhile, is definitely a people person. When welcoming Jones to the stage to accept his award, Jim Pattison, owner of Overwaitea Food Group and Jones's boss, joked about the countless shoppers who want to have their picture taken with the Save-On-Foods president. "Let me tell you, there is no person in the province of British Columbia that is more recognized than Darrell Jones," said Pattison. "He's a people person and he understands the business."

When it came time for his speech, Jones thanked a long list of family and friends and made a point of recognizing his work colleagues back home. "Over the past 40 years in the grocery business one thing has become crystal clear to me: this business is all about people," he said. "It's the people who make the company successful, not the bricks and mortars, nor is it the fantastic IT systems, the wonders of e-commerce or no not even artificial intelligence. It's always been and always will be people."

Jones started with the company more than 40 years ago in Cranbrook, B.C., bagging groceries after school. Over the years, he has worked in 23 stores in various parts of the province. He held a number of senior level roles with the company before becoming president of Overwaitea Food Group in 2012.

Past recipients of the Golden Pencil Award include Jean Gattuso of Lassonde Industries, Gus Longo of Longo Brothers, Marc Guay of PepsiCo Foods, Louise Wendling of Costco and Eric La Flèche of Metro.