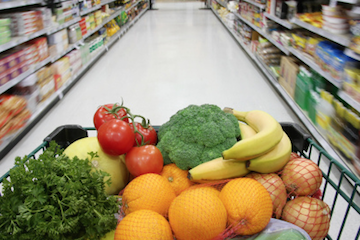 It was a year marked by a trade spat with our U.S. neighbour, rising labour costs and food safety scares (we’re looking at you, romaine lettuce!). There was much ado about the debut of Amazon Go with its AI wizardry, and we watched grocer after grocer grapple with the puzzle of last-mile delivery. It was also, of course, another year of intense competition. 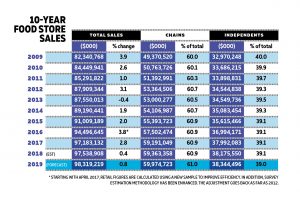 The impact of all of these pressures resulted in 2018 being a less than banner year for Canada’s grocers, with total sales through traditional grocery stores and convenience stores inching up to $97.5 billion in sales, a mere 0.4% increase over the previous year. It was the second-worst performance in 10 years—only 2013, which saw a 0.4% decline, did worse.

As in past years, our Market Survey reveals some interesting regional stories. Quebec fared the best among the provinces, ringing up sales growth of 2.6%, matching the growth it achieved in 2017. Atlantic Canada recovered from its 9.1% plunge in 2017 (the result of store closures and a slow economy) and saw its sales grow 2.5% last year. Alberta also fared better in 2018, with its sales growing 1% in contrast to a 6.8% decline in the previous year. In the country’s biggest, most competitive grocery market, however, things were less positive with Ontario seeing a sales decline of 1.8% in 2018. In the West, British Columbia also saw sales dip slightly by 0.1%. 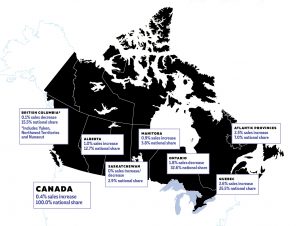 Canadian Grocer’s Market Survey is an annual look at the traditional grocery industry—and by that we mean chain and franchise supermarkets, unaffiliated independents and major banner convenience stores. For the purposes of the survey, chain supermarkets are defined as any four or more stores with a single ownership, which includes a number of what the industry considers independents such as Longo’s in Ontario, Colemans in Newfoundland and Freson Bros. in Alberta.

The Market Survey is based on Statistics Canada data strictly for supermarkets and convenience stores. By limiting our calculations to the traditional grocery universe, we can easily compare this year to the last 50 years of Canadian Grocer’s Market Survey. While the Survey does not reflect food sales generated at drugstores, mass merchandisers (such as Walmart) or warehouse clubs (such as Costco), we know that sales through the latter two channels climbed last year as they continued to appeal to value-seeking consumers. CIBC World Markets estimates Walmart and Costco’s food sales growth to be 8.5% and 9.2% respectively—considerably better growth than the meagre 0.4% increase traditional retailers eked out.

“There’s no question that data show grocery stores are clearly lagging inflation and population growth,” says Karl Littler, senior vice-president of public affairs for the Retail Council of Canada. He adds that one of the reasons may be extremely competitive pricing by retailers during 2018. 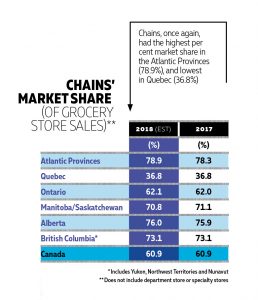 According to Nielsen research, promotional pricing remained high in 2018, with a little more than half of units sold with a price cut. Speaking at Canadian Grocer’s Thought Leadership conference last November, Carman Allison, Nielsen’s vice-president of consumer insights, said driving sales through promotion is obviously not a sustainable growth strategy, but that a promising sign was dependence on such pricing was starting to finally level off.

It’s worth mentioning that specialty stores such as meat markets, green grocers, and fishmongers (which are measured separately in the survey and not included in the overall $97.5 billion sales gure) continued to gain ground in 2018 with sales growing in every province except Alberta, where sales dipped slightly last year. Overall, sales through these retailers reached nearly $7.9 billion, an 8% increase from the previous year and a 62% increase from 2010. 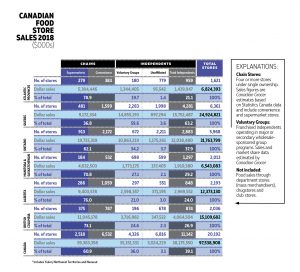 Total chain sales increased by 1% to $59.36 billion; independent voluntary groups' sales were also up by 1% to $35.15 billion, while unaffiliated sales fell by 5% to $3 billion. All tallied, there was no change in the national balance between chains and independents. Chains’ share of market remained at 60.9% with independents holding at 39.1.

“With increasing competition in all retail channels it is encouraging to see the independent stores (both franchise and unaffiliated) maintain their share across Canada. It is a testament to our entrepreneurial independent retailers to differentiate themselves and be relevant to their customers in all communities across this great country,” says Tom Shurrie, president and CEO of the Canadian Federation of Independent Grocers. 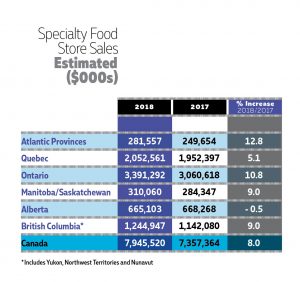 The question now is how will things shape up this year? In Canada’s Food Price Report 2019,the experts from the University of Guelph and Dalhousie University predicted wage stagnation and rising prices for all foods, with the exception of meat and seafood, will put consumers under pressure this year. Nielsen’s Allison also predicted at November's Thought Leadership conference that disruption in retail will continue, with potentially $7 billion shifting to warehouse clubs, dollar stores and online by 2020 as these channels become more appealing to value-and convenience-seeking consumers. “This is a forecast,” Allison told retail attendees. “Think about how you can intervene and get more of that share.”