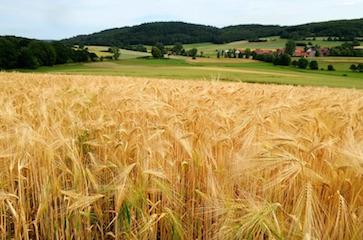 Some Alberta farmers are concerned about their crops after a late-summer snowfall blanketed parts of the province, with more flurries expected in the forecast.

Early season snow can squash crops that grow upright, like wheat and barley, make them harder to harvest and decimate their quality, leaving farmers with a less valuable product.

Greg Sears has been growing canola, wheat, barley and peas just north of Grande Prairie, Alta., for about a decade and recently had about 15 centimetres of snow cover his crops, pushing down his cereal and canola and freezing anything that wasn't fully mature yet.

"It's just going to be a long, slow harvest from here on in--even if we do get some really nice weather," he said.

The area needs warm, windy weather to dry the crop, Sears said, adding the current ground conditions will make it hard to get equipment on the land.

That difficult harvest comes after wildfires in B.C. earlier this year created additional pressure with the drifting smoke slowing down the crop development, he said.

The neighbouring province saw thousands of square kilometres of woodland charred by more than 2,000 wildfires since April, according to the BC Wildfire Service.

In addition to slowing the harvest, the snow likely deteriorated the crop quality.

Sears hoped his barley would go to a malt beer brewing market, but now expects it'll land elsewhere for a lower price. He anticipates about $100 an acre less in revenue.

His wheat will likely fall from milling-grade, which is for human consumption, to animal-feed quality, he said. The pea crop will suffer on two fronts, he said, expecting a quality and yield reduction.

"It's not unusual, but it's not common" to see this type of weather in September, said Kevin Bender, chairman of the Alberta Wheat Commission, an industry group working to boost Alberta wheat's profile.

He's farmed primarily wheat and canola, as well as barley, oats, peas and some other crops for about three decades near the town of Bentley, north of Red Deer, Alta. He too will have to wait for the snow to melt and dry before harvesting.

An extended exposure to heavy, wet snow or rain can deteriorate the quality to be suitable for animal feed rather than human consumption, he said.

The price difference depends on how much of each type is available, Bender said. If weather negatively impacts a lot of the prairies and there's a plethora of feed-quality wheat, he said the gap in price could be as big as between 30% and 40%.

For some farmers, the snow provided a little relief.

Gord Visser has been growing potatoes in Sturgeon County, just north of Edmonton, for decades.

He spent some sleepless nights recently worrying that impending frost could destroy a large chunk of his current crop, but the snow provided a blanket to insulate his spuds from the cold.

Still, the weather delayed how soon he could harvest his 500 acres by about a week, he said, because it's too muddy to work. He's still got 60% of the crop left to bring in and typically aims to be finished by the end of September. Now, it looks like the harvest won't be done until October, when the risk for colder weather is higher.

Weather worries are par for the course for farmers, said Bender.

"We know that weather changes and one year is going to be completely different from the next,'' he said. ``So we just have to be prepared, and we are. We adapt relatively well to it."