In 2018, U.S. consumers ate roughly 13 billion burgers, according to data from consumer trends market research company NPD Group. And burgers are consistently one of the most popular items on menus across the country.

But meatless patties continue to gain in popularity, as Forbes reports 70% of the global population is either reducing meat consumption or leaving meat off the table altogether.

Beyond Meat, a producer of plant-based meat substitutes, is making headway toward becoming a big part of the meatless shift that consumers are gravitating toward.

"The burger is something people love. And so we went after that core part of the American diet," Ethan Brown, founder of Beyond Meat, tells CNBC "Make It. 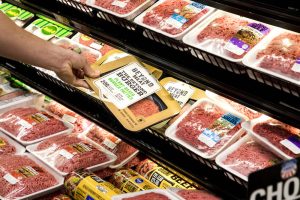 And since its debut at Whole Foods Market in May 2016, Beyond Burger patties have made their way into a wide range of supermarkets across the U.S. and Canada (Summerhill Market, Farm Boy), restaurants (A&W), hotels and even sports stadiums.

Beyond Meat says it has sold 25 million Beyond Burgers worldwide. The company recently filed for an IPO and is reportedly worth more than a half-billion dollars.

Brown says the company finds 93% of consumers who shop conventional grocery stores and are buying Beyond Meat products are also putting animal meat in their baskets. “So they’re buying not only plant-based meat, but they’re buying animal meat, and that’s a really important breakthrough for us,” Brown tells CNBC's "Make It."

The company grew from a US$4.8 million valuation in 2011 to $550 million in November 2017, when it closed its latest ($55 million) round of funding, according to private market data company PitchBook.

A version of this article appeared at StoreBrands.com.