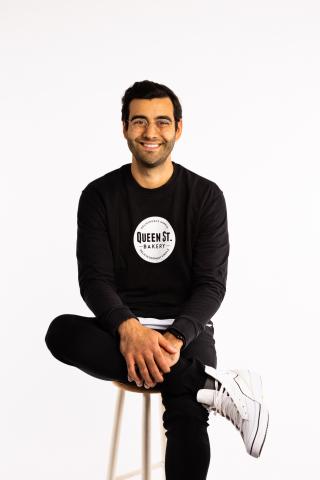 After studying business at Western University in Ontario, then building a career in his family’s B2B fuel company, Angelucci says his latest venture, gluten-free bread brand Queen Street Bakery, was partly realized by accident, but ultimately born out of necessity.

“My mom and wife are both gluten intolerant, as were a few other people at our office, and nobody really liked the gluten-free options that were available,” Angelucci says. Growing up in an Italian household, he recounts the many occasions he watched his family bake bread from scratch. “I’ve never really seen sugar added to bread, yet if you pick up any bread off the shelves, a lot of them have sugar or some version of sugar in them,” he says. “Most gluten-free options currently available are made to satisfy the necessity of it, but not necessarily the healthy aspect of it. Most products are made with rice or corn, which nutritionally don’t have a whole lot of value.”

While Angelucci himself is not gluten intolerant, the idea of creating a better gluten-free product piqued his interest. In 2018, he enlisted the help of a baker and started testing recipes with the goal of creating a gluten-free bread that was so good, those eating it wouldn’t be able to tell that it was gluten-free. “We brought in someone who had experience in this area and trusted him to help grow the business,” Angelucci says. “Unfortunately, that didn’t quite work out, and the business ran into some trouble, but we pushed through and landed some key accounts after that, which gave us the basis for growth.”

Despite a bit of a rocky start, Angelucci and his team persevered. In 2019, Queen Street Bakery’s current president (and Angelucci’s long-time friend) Tony Ayala came on board, and business boomed.

“We brought in UNFI Canada to get us distribution across the country, as well as a broker to help us get the meetings with some of the other big retailers,” Angelucci says. “By August 2019, we had brought on Sobeys and a few of the other larger, regional accounts.” Queen Street Bakery also recently attracted the attention of District Ventures Capital, led by Canadian investor and entrepreneur Arlene Dickinson, who appears as a judge on CBC’s Dragons’ Den.

“The team at DV [District Ventures Capital] picked up on us very early and believed in the product and the vision for the company. They invested in us when we were quite small—uncommon for institutional investors—and have helped give us credibility,” Angelucci explains. “Since then, we have expanded together and even added in a few other partners who share the same passion and vision for what this can be.”

To date, Queen Street Bakery’s products can be found in more than 1,000 grocery stores across Canada, including the Northwest Territories, and in major retailers including Loblaw, Longo’s, Zehrs, Walmart and Sobeys. Last June, Queen Street Bakery launched in the United States, where its products can now be found in roughly 1,500 stores. “We’re just scratching the surface,” Angelucci says. “If things go according to plan, we should be above that $5 million mark sometime next year.”

Compared to a typical loaf of sliced white bread, a Queen Street Bakery loaf packs 12 grams of fibre, zero grams of sugar and 120 calories per loaf. The average loaf of white bread typically has just one gram of fibre, three grams of added sugar and 150 calories per two slices. Drawing inspiration from the ingredients grown in his grandmother’s backyard, Angelucci developed a series of superfood breads made from raw, natural ingredients like chia seeds, white beans, grape skins and activated charcoal. The company currently makes four variations of bread—the Chia Loaf, White Bean & Millet Seed, White Bean & Grape Skin, and Cinnamon Raisin. All of the loaves are free of allergens, and none of the products contain nuts, gluten, wheat or added sugars. Alongside its loaves, Queen Street Bakery also sells gluten-free superfood bagels (available in Chia & Flax or Cinnamon Raisin) as well as artisanal buns, pizza dough, and baking flour made from millet and sorghum flour.

“I think we are going to look back on carbs the way we look at fat now,” says Angelucci, adding that fat was once deemed unhealthy, until people realized that all fats are not created equally, and neither are carbs. “The average person is just looking for a good, all-around healthier product that they can eat every day. In 10 years, I think we’ll be treating carbs as a staple again, but in moderate amounts and from the best possible sources. We like to say that we give people the bread they want, made from ingredients the body needs.”

This article appeared in the March/April issue of Canadian Grocer