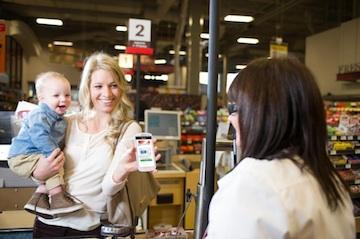 Calgary Co-op has turned coupon clipping into coupon clicking, thanks to a new partnership with digital coupon startup Coupgon.

Calgary Co-op is now accepting Coupgon coupons at its 24 stores in metro Calgary.

Coupgon users clip or share the digital coupons using their computer or smartphone, and then redeem coupons by scanning their mobile device at the checkout, via a QR code reader attached to the payment terminal. The app also tracks user redemption to push appropriate offers to its customers.

“Paper coupons are painful: You have to carry them, they can get out-of-date. It’s just not a great shopping experience it can be a little embarrassing when you’re shoveling out all these coupons at the till,” he said.

“We’re very receptive to giving our customers new technology and easier ways to shop at our stores and redefine their customer experience,” he said.

Sinopoli called Calgary Co-op a forward thinking company and said the partnership is a "perfect fit... When we approached them they didn’t blink,” said Sinopoli. “We had struck a deal within days of the presentation and we just seemed to have the same vision.

“I don’t think we could have found a better partner to launch with,” he added. “The support we’ve got from them has been fantastic, and we’re already accumulating information that’s going to be incredibly valuable and make it a lot easier to enter other markets.”

Sinopoli said Coupgon is currently finalizing agreements with three other major Canadian grocery chains, and that product manufacturers are eagerly signing on.

“It really has been nearly 100% conversation rate,” he said. Sinopoli won’t disclose what Coupgon charges participants, but says they pay only when one of their mobile coupons is redeemed.

He said mobile is “absolutely” going to become the de facto couponing method, but suggests it will another five to 10 years before it achieves that status. “With the redemption rates being 10 times higher on digital than paper, this is certainly the direction it’s going, and it’s being picked up fast,” he said.