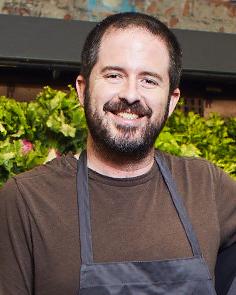 It’s been six months now since the pandemic took hold in Canada, triggering massive changes to the way people shop for food. In April, the early days of the COVID crisis, Canadian Grocer reached out to The Sweet Potato founder and co-owner Digs Dorfman about how he—and his full-service grocery store in Toronto—had reacted and adapted to the massive changes. We decided it would be a good time to check back and see how things are going now.

The Sweet Potato's founder and co-owner Digs Dorfman.
How are things for Sweet Potato these days?
Things are good. Other than the extensive social distancing measures we still have in place, and many senior staff working from home, it's business as usual in most ways.

We were last in touch late April when the situation was still unstable. When did things level off?
Probably sometime in late June or early July. As Ontario's new rates of infection began to lower, and parts of the province began to open up again, the tension felt by both staff and customers relaxed significantly. That said, I think we were out of crisis mode internally sometime in mid-May, at which point we'd figured out any operational changes we'd needed to make.

How has consumer behaviour shifted since the early days of the pandemic? Have you seen a return to pre-COVID shopping habits?
We're still seeing significantly increased basket sizes, which means customers are still shopping less often than before and in larger amounts. We also see less traffic on the weekend than we used to, and more traffic during weekdays, which we attribute to many people still working from home and thus having less fixed weekly schedules. Any type of hoarding has also stopped, for the most part, though we have seen an increase in items like flour, which would suggest that more people are baking from home. Learn to bake bread--it's a great way to pass the time during a pandemic!

Are you preparing for a second wave? How are you preparing?
We've never let our guard down. As far as we're concerned, we owe it to our staff and our customers to remain vigilant and to take the maximum possible measures we can to ensure safety at all times, whether the numbers are rising or falling. Other than making minor adjustments to our routine as more data has become available about best practices, we're operating now exactly as we were in May. Which is to say--we're more than prepared for whatever comes next.

How are you planning for holidays such as Thanksgiving? And how has COVID changed the way you plan for these occasions?
Usually our kitchen prepares Thanksgiving dinners in portions for roughly six people. This year, in an effort to encourage social distancing during the holidays, we're letting people order complete dinners (including turkey, stuffing, etc.) portioned per person. The idea is that families might not all be celebrating together for safety reasons, and might need individual portions which can be sent out to various households. So even if people are celebrating by Zoom, everyone can share the same food.

How was planning for back to school this year different from previous years?
This year's back-to-school season has been a very sensitive time for a lot of people. Everyone has differing and very strong opinions on what people should be doing, and likewise everyone is under an enormous amount of stress. We worked hard on our messaging to make sure people felt supported and not pressured, regardless of their choices. As such, our usual 'Back-to-School' messaging became 'Back to School?' and our campaign focused on stress relief and small comforts as well as the usual school-safe and kid-friendly options.
Advertisement
Advertisement