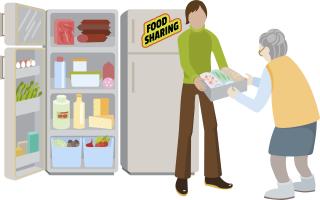 On a sunny afternoon, there's a steady flow of people coming and going from behind a pharmacy in Regina's north-central neighbourhood.

Tucked in behind the building is a small shed, its doors open to a fridge, freezer and pantry.

There are containers of pasta salad, sandwiches, wraps and cans of food.

Not much is said and some people look to see what's there. Others have brought bags with them to restock their empty kitchen shelves.

It's a cycle that repeats itself throughout the day at the fridge that belongs to no one and everyone.

"I dream of free fridges just being a normal thing in the city," says Danielle Froh, an emergency room nurse and one of the organizers behind Regina Community Fridge.

The concept behind it is simple, she says: Take what you need; leave what you can.

It's a place where people can go when they need food, which is supplied through donations, she says.

"I know there's a lot of hungry people in Regina. COVID-19 has only made this worse."

Across Canada, the pandemic and public-health orders brought in to stem the spread of the novel coronavirus have led to increased unemployment.

Statistics Canada says low-wage workers have been hit hardest by lockdown measures, and unemployment rates have been higher for Indigenous people and visible minorities.

Community fridges exist elsewhere in the world, but it's the pandemic that appears to have spurred a free fridge movement in Canada. Those involved say they believe the fridges are here to stay.

Froh says she was inspired last summer after a community fridge opened in Calgary. An organizer there says it was based on similar fridges in cities including Toronto and New York.

"We were all just seeing a lot of people really hit hard by COVID with losing their jobs," says Sierra Leedham with Community Fridges Toronto.

That city now has at least seven free fridges, which are stocked by some larger donation sources but often by regular people who want to give food to their neighbours, says Leedham.

Besides offering staples--produce, deli meats and eggs--there are culturally appropriate foods to fit the neighbourhoods where the fridges are located, she adds. There's also personal protective equipment.

Leedham, like those involved with similar initiatives, say volunteers make sure there's no expired food and the sites are clean. But there's no policing of who can take food or how much is taken.

"You don't know why someone might need more food than another person."

Alice Lam, a co-organizer with Calgary Community Fridge, it wasn't clear at first who would use the fridge when it opened last August.

It turns out single parents make up about half of those who do--diapers are among the items stocked, Lam says. Other users include seniors living on low incomes, as well as people taking food for relatives or those with disabilities.

Lam says it was initially thought the fridge would stay full for at least a day, but it's being emptied and restocked up to seven times a day. Fruit, granola bars and bread disappear so quickly that many people leave without anything.

She says it seems like the fridge is always empty, even though about $6,000 worth of groceries move through it each week. It speaks to the need in the community, she adds.

One woman from the nearby Peepeekisis First Nation, stopping in the city for her husband's medical needs, says the fridge has been a big help.

"It's been helping us survive everyday as it goes by," said the woman, who didn't want to be identified.

"Grateful it exists in the community. Without this place I don't know what we'd do."

Froh says at least two other fridges are planning to open in Regina. Organizers in Vancouver recently announced the opening of two of three planned fridges there.

The pandemic has brought about a new way of thinking about how people can help feed one another, she says.