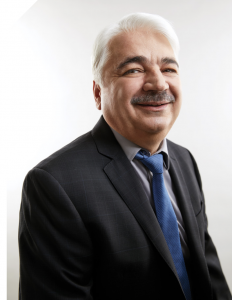 Unlike many other indie grocers, Jim Bexis wasn’t born into the business, nor did he spend his youth stocking shelves, sweeping floors or bagging groceries. It was family, however, that eventually pulled him into the grocery game.

When Gerry Aravantinos, Bexis’ father-in-law, needed help at his business—the now shuttered Sun Valley Fine Foods—he gave Jim a call. Not one to refuse a request, especially from family, Bexis agreed to lend a hand at the store, which was located in Toronto’s Greektown neighbourhood.

“I started out in the back office in 1985, helping out and then slowly, in 1986, we opened another store, Sun Valley Supermarket , and I’ve been here ever since,” says Bexis, now owner of the store along with his partners, brothers-in-law Peter Vacirtzoglou and Spiros Aravantinos.

Bexis, who had a background in foodservice, says he immediately “fell in love” with grocery. When asked what he loves about it, Bexis doesn’t hesitate, rapidly listing a number of reasons: meeting people, selling food, being involved with the community, working with family—although he jokes that the latter can have both “advantages and disadvantages.” And no less than twice, he mentions how much fun it all is. “It’s been a great ride,” he adds.

Aside from the day-to-day running of the business, Bexis is also a champion of charitable causes in his community—he has particular affection for Variety Village—and, for years, has been actively involved in industry groups such as DCI and the Canadian Federation of Independent Grocers (CFIG). In October, after serving eight years on the association’s board, Bexis will become chair of CFIG, succeeding Peter Cavin who heads up Country Grocer in British Columbia. As he steps into the role, Bexis is charged with being a voice for some 4,000 independent grocers at a time when the industry is in the midst of unprecedented change and facing challenges around issues such as labour, energy costs, heightened competition and consumer diversity.

Canadian Grocer caught up with Bexis recently to talk about his store, the grocery business and the big year ahead. Here are edited excerpts from our interview:

What are the most important lessons you learned from your father-in-law, a lifelong grocer, about the business?
Always put the customer first and to be passionate about what you do. He’d get pretty passionate if things weren’t right; everything had to be the best—especially when it came to fresh. Produce was his pride and joy and today we’re still very strong in fresh; it’s probably the strongest part of the store.

The Scarborough community you serve has changed since you first opened for business. How have you adapted?
That’s a challenge we now face. We’ve slowly adapted to changing demographics. Our customers were mostly European when we came here, now it’s very multicultural so we’re bringing in foods from every corner of the world: Korea, China—you name it. Our assortment has definitely changed over the years.

What has contributed to Sun Valley Supermarket’s staying power?
Engaging with our customers and making sure to stay relevant—keeping up with what our customers’ needs are. You can’t get stuck in a bubble, you’ve got to change and evolve.

Why is giving back to the community so important to you?
We’re a little bit more fortunate than some and giving back is just what we love to do. We’ve been involved with a lot of schools in the area and have done a lot of charity work. One of my favourite charities, just down the street here, is Variety Village—we’ve done tons of work with them over the years. To see the challenges that some young kids face in life, and to be able to help with that in some small way is very rewarding.

What do you like to do when you’re not working?
In this business we don’t get a lot of time off, but I always try to enjoy life with my family—my wife and two children.

What grocers impress you?
Across Canada? Quality Foods Longo’s, Joe Greco at Concord Food Centre—he’s done a great job adapting to what’s going on in the market. Really, there are so many good ones, I don’t want to leave anybody out!

What is the biggest challenge facing independents right now?
I guess the speed of change. For an independent, especially for a smaller store that doesn’t have the resources it’s going to be a challenge going forward to keep our share of the market. That’s where we lean on CFIG to help us—as part of a bigger group, we have a bigger voice.

Is that the real value of CFIG, would you say, the collective voice?
Yes, and also the learning and sharing. One of the great things in this business is that all of the independents I have had the opportunity to work with at CFIG have shared tons of information. I’ve gone from coast to coast and these people open up their homes and their businesses and explain how they do things. It’s quite amazing.

Also, being able to engage in conversation with the AMC and to share things with them on what’s working and what’s not. It’s very different when you get to talk to people at the 10,000-ft.-level. One of the successes we’ve had recently was with CFIG’s Master Merchandiser program. Participation wasn’t there so we put changes in place and we went from receiving a few hundred entries each year to I think we’re going to hit 4,000 entries this year, so it’s been a huge success. By working together, we accomplished a great result.

Soon you will be chair of CFIG. What do you hope to achieve over the next year?
To continue the work we’ve been doing, whether it be on advocacy or working with our partners such as the big CPG companies—all those things—and to make sure the independent is not forgotten. I also want to continue to encourage other independents, especially the single-store , to get involved and engaged with what we do.

I have to say, being selected as chair is truly an honour. Many greats have chaired this organization and I have big shoes to fill but I’m thankful for the opportunity to do it.