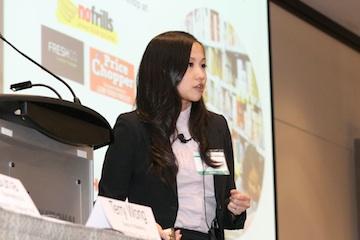 That was one of the major points made during Canadian Grocer’s Ethnic Insights conference Tuesday in Toronto.

The conference featured expert speakers, as well as grocery store operators and suppliers who cater to ethnic shoppers.

As of 2011, there were 6.3 million visible minorities living in this country, compared to 26.5 million Caucasians.

By 2031, visible minorities will double to 12.8 million, while the number of Caucasians will grow just 10 per cent to 29.2 million.

“Visible minorities are changing the Canadian landscape,” she said.

Cheung pointed out a few shopping habits that retailers and CPGs should be aware of.

What do they buy? Nielsen Homescan panel data shows Chinese shoppers are twice as likely as all consumers to buy vegetables and dried grains such as rice, and 1.5 times as likely to buy pasta, refrigerated drinks, skin-care preparation and inter-dental products.

Chinese also buy deals more often than the general population. Thirty-six per cent of Chinese shopping expenditures are on deals compared to 25 per cent for all Canadians. Among the most common products purchased on promotion by Chinese: razor blades, bread and gum.

READ: An ethnic chain with spicy meals and fast-growth potential

South Asians are three times as likely to shop at discount stores, such as No Frills and FreshCo, and twice as likely to head to Shoppers Drug Mart and London Drugs.

Ethnic shoppers tend to shop at several stores per week for groceries. These include ethnic supermarkets, discount stores and Costco.

She noted that a typical South Asian mom in Canada will head to the ethnic store to pick up Asian specialty foods, produce and, perhaps, Bollywood-type DVDs; a discount store to buy basics and school snacks for her children, and Costco for cleaning products, health and beauty, food basics and to try new foods.

She said it is important to understand how people who’ve immigrated to Canada  behave. For instance, in China people often eat out. The useful tip here for grocers, she said, is Chinese in Canada see prepared foods in the supermarkets as a good alternative to restaurant food.

The typical Chinese consumer is especially keen on Costco,. “Costco is about aspiration to her,” Weaver said. “Chances are she was brought to the store by a friend and she can’t wait to get a membership card.”

Another Ethnic Insights conference speaker delved into the store experience.

Robin Sherk, director of retail insights at Kantar, said retailers can no longer assume all customers are the same. They need to make the shopping experience more accessible to all.

One way to accomplish that goal is to put more signs up explaining the different ways foods can be cooked and eaten. For example, signs in the produce section could teach Caucasian shoppers about Cilantro, a popular Latin American ingredient, while signs about Romaine lettuce could teach ethnic shoppers about the North American salad staple.

She urged retailers to use displays for holidays, such as Cinco de Mayo, to get all shoppers excited about ethnic foods.

Also featured at the conference was a panel session with representatives from retailers such as Oceans and Galleria Supermarket and manufacturers such as Ti Foods and Tree of Life Canada. The panel was moderated by Canadian Grocer's managing editor, Nancy Kwon.

Partha Guha, senior marketing manager at Unilever International, said reaching ethnic consumers is a matter of education and understanding. “Ethnic consumers are not aliens,” he said. “It’s another market segmentation.”

Manoj Biswas, vice-president of corporate affairs at Oriental Food Mart, a Toronto-area grocer, said mainstream stores often try to lump all ethnic products in one aisle under the heading “International”–something that doesn’t resonate with many ethnic Canadians.

Most panel members suggested that to reach ethnic consumers, retailers and manufacturers need to understand their shoppers better. This needn’t be difficult, several pointed out, and can be accomplished by having the right people selling the items in stores.

Terry Wong, director of marketing for Authentic Ethnic at Tree of Life, said that when running an in-store demonstration of an ethnic product, stores should consider having someone who is ethnic handle the demo. “So when people really start to ask about how to use the product they can answer.”

Several panelists also pointed out that products, services and merchandising need to be authentic. “We can’t cheat the consumer,” Guha, said. “You can’t sell Japanese food that tastes like Chinese food.”

Frank Ho, vice-president of Oceans Fresh Food Market, pointed to a 55,000-square-foot store his company will open in Hamilton that will have an extensive prepared food section he described as “East meets West.” In addition to sushi and Mandarin-style dishes, there will also be western foods, a sandwich bar and coffee bar