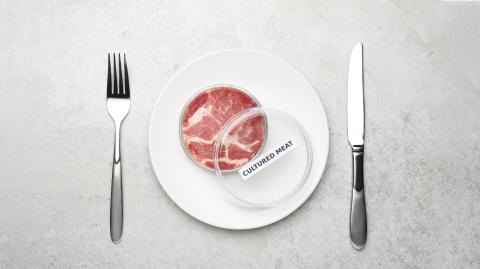 Canadians could soon be eating lab-grown meat that tastes like conventional meat. Just don’t expect to see it on grocery shelves any time soon.

Lab-grown meat along with other cell-based products are “the future of food,” according toLejjy Gafour, president of Vancouver-based Cult Food Science, the first publicly traded company in North America to invest in cellular culture companies. “It isn’t that it’s just like meat. It literally is meat, down to the cellular level. Making that clear to consumers will be really important.”

Gafour says the ability to create meat that does not require the slaughter of animals will mean that “people will embrace it for reasons that include sustainability and compassion.” He expects to see cell-based products available within the next five to seven years.

Major meat and food processors are betting heavily on its prospects, says Simon Somogyi, director of the Longo’s Food Retail Laboratory and Arrell chair in the business of food at the University of Guelph. He notes “massive” investments of $4 billion in lab-grown meat have recently been made by companies like Maple Leaf Foods, Nestlé and JBS.

Somogyi says the cost to produce a kilogram of lab-grown meat has dropped from more than $200,000 about 10 years ago to about $20 today. That’s still higher than conventional animal protein but, at the current rate of investment and with declining production costs, lab- grown meat will soon cost the same as conventional meat. “It’s a two-to-three-year proposition. It’s going to be a reality sooner than later.”

Making lab-grown meat involves taking stem cells from an animal, which are then grown in fermentation vessels, not dissimilar to the giant tanks seen in breweries. Combined with nutrients like amino acids and carbohydrates and a growth factor, the cells ferment and multiply to create meat.

In 2020, Singapore became the first country to grant regulatory approval to lab-grown meat. Chicken nuggets from Good Meat, a division of San Francisco-based Eat Just, are now available in Singapore but have yet to make it to grocery store shelves.

Receiving regulatory approval in Canada and achieving commercial viability will be big stumbling blocks, says Dana McCauley, chief experience officer at the Canadian Food Innovation Network (CFIN) in Guelph, Ont. “There’s really not a lot of scalabilities in the many projects that are out there,” she says. “Right now, it’s just a lot of people doing a lot of disconnected activity.”

Lab-grown meat has potential but it’s not yet ready for prime time, says Jo-Ann McArthur, president of Nourish Food Marketing in Toronto. “It’s going to be quite niche for a while because it doesn’t really have any proven commercial viability.” In Canada, it will likely show up first in fine dining restaurants to build cachet and interest early adopters and influencers.

She adds consumers will have to be convinced the process makes meat in a more beneficial way than traditionally raised beef, for instance. It may be easier for consumers to support sustainably raised, certified humane or grass-fed beef.

On the other hand, “consumers have been very accepting of vertical farming,” which McArthur describes as more of a tech play than a traditional farming play. As well, younger generations tend to be open to the marriage of science and food. “They understand that science is probably going to be a big part of feeding the world,” in the future, McArthur says.

Getting the name right will be another critical step, she says. Terms like “lab-grown” or “cellular meat” are not consumer-friendly, while “cultivated” or “clean meat” are.

Advocates of the technology should also learn from the poorly handled launch of GMOs, says CFIN’s McCauley. Communication and education will be key in avoiding consumer confusion.

Somogyi notes that research suggests cultivated meat produces about one-third of the carbon-dioxide of beef production. In addition, “the speed at which the energy efficiency of cultivated meat is becoming more efficient is far greater than the efforts at making conventional meat more efficient.”

He forecasts that by 2030, conventional meat production could lose 20% of its market share to cultured meat and plant-based meat replacements.

The first lab-grown meats will be in the form of chicken nuggets or hamburgers that will be sold in the frozen section of grocery stores. Once the technology can mimic steak and other meats, “I would suspect it is likely to be sold next to conventional meat,” says Somogyi.

McCauley says it could take 50 years before lab-grown meat results in a major shift in agriculture. “I don’t think it’s the end of farming or the end of going to a steakhouse. That behaviour is ingrained culturally in Canada.”