Whether it’s a regular joe, a specialty latte or a cup of instant brew, Canadians love coffee and reach for it more than any other beverage (excluding tap water). In fact, according the recently released 2011 Coffee Drinking Trends in Canada report, some 64% of adults in this country drink coffee every single day. Canada is also the fastest growing traditional importing county in terms of coffee consumption per capita. All news that bodes well for the category.

“The lift in coffee penetration that we measured in 2010 has been sustained this year,” says Stephanie Blenkiron, senior research manager at Maritz Research Canada, the rm that conducts the study annually for the Coffee Association of Canada. Also holding steady is the amount of coffee consumed each day by adult coffee drinkers: 2.7 cups.

That amounts to a lot of coffee being consumed by Canadians who report drinking it at all different parts of the day (with a spike at breakfast) and in every imaginable location—at work, at school, while on-the-go and, of course, in their homes and at restaurants. Incidentally, coffee ranks as the No. 1 menu item at foodservice outlets where more than two billion coffee-drinking occasions occur each year. 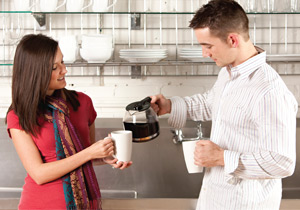 Although there’s clearly a lot of action at foodservice, home is where the majority of Canadians prefer to drink their coffee. According to the coffee drinking study’s latest findings, 80% of adult Canadian coffee drinkers report that they consume this beverage in their homes—an impressive number that has been steadily climbing over the years, edging up from 79% last year and 72% three years ago.

It’s no wonder, then, that retail coffee sales are booming. According to Nielsen’s measures, the roast and ground coffee category alone is worth about $700 million (this figure excludes instant, random weight and bulk coffee) in sales. And although competition for share of throat in the beverage aisle is intense with Canadians confronted with an ever-increasing number of beverage options, roast and ground coffee is thriving. In fact, it’s ranked as the third-largest (non-refrigerated) beverage category at retail and, by far, is the fastest growing of the beverages, experiencing a whopping 19% growth in dollar sales and 6% growth in tonnage.

When it comes to the kind of coffee Canadians are pouring into their cups, the coffee drinking study reveals that a bit of a shift is taking place. Traditional hot coffee, although still consumed by the bulk of Canadians each day, has suffered a dip in terms of penetration. According to Robert Daniel, managing director of Maritz Research Canada: “It’s important to note that traditional hot coffee is significantly down, from 62% last year to 59% this year,” he says. “On the other hand, what might be good news is that over the past three years we’ve noticed that there have been significant increases in the consumption of specialty coffee.”

Indeed, specialty coffee—which includes cappuccino, latte, espresso, café mocha and iced coffee—has reached the critical 10% mark with one in 10 adult Canadians saying they drank a specialty coffee yesterday. Among the youth surveyed—those aged 13 to 24—specialty was even more popular with 22% of respondents indicating they consume a specialty coffee beverage each day. A fact worth noting as it is through specialty coffee that these younger consumers enter the coffee category.

Another trend uncovered by the coffee drinking study is the stability that the instant coffee format continues to enjoy. Not so long ago instant was all but written off as it languished in the coffee aisle. Not so any longer. “I think it is pretty encouraging that we are reporting stability since 2008, with 12% of Canadians having drank instant coffee in the past day,” says Blenkiron.

In sales terms, instant coffee is also holding steady, ringing up sales of $157 million at retail and with growth of 1% in both dollar sales and units, according to Nielsen’s latest MarketTrack numbers.

Some reason for optimism in this category lies with improving consumer attitudes towards the instant format. When asked their opinion about instant coffee, 48% of coffee drinkers said they agree that instant coffee is better now than it used to be (up from 39% in 2010), while 40% agreed with the statement that recently there have been improvements in instant coffee (up from 29% last year).

What’s contributing to the change? “I think that some of this has to do with improvements to existing products and also new product offerings in the market, such as Starbucks Via,” says Blenkiron.

To better understand our coffee drinking habits, Maritz Research Canada surveyed 2,613 adult Canadians and 1,000 youths from across the country to learn what we drink, when we drink it and where. Here’s what they found:

Coffee Still No. 1:
64% of adult Canadians drink coffee every day, making it the most popular beverage in the country (after non-bottled water).

Why coffee?
When asked their reasons for consuming this brew, 78% of coffee drinkers said it was part of their routine, while 57% said it satisfied a craving and 55% said they drink coffee because it “wakes me up.”

Men & Women:
In 2011, the number of women reporting drinking coffee (all coffee beverages) climbed to 65%, while only 63% of men report drinking coffee, down significantly from 67% a year ago. But when it comes to the number of cups consumed each day by coffee drinkers, men consume an average of 3.0 cups of coffee, while women drink just 2.4 cups.

Through the ages:
Penetration of all coffee beverages continues to be highest among Canadians aged 65 and over (81%), while just 37% of Canadians in the coveted 18- to 24-year-old age group say they drink coffee.

Coffee by daypart:
No surprise here: the bulk of coffee drinkers (86%) say they drink coffee at breakfast. This number drops to just 27% who drink coffee in the morning period, 12% at lunch, 17% in the afternoon, 9% at dinner and 12% in the evening.

What the kids are saying:
37% of youth (those aged between 13 and 24) report drinking coffee each day. When it comes to their preferred format, 17% of survey respondents said they drank pre-flavoured coffee yesterday, while 22% said they drank specialty. Why do they drink coffee? 57% of those surveyed said because it “wakes me up.” And among those youths who don’t drink coffee? 68% said they just don’t like it.

On Demand on Fire

The biggest news to hit the in-home coffee market in recent years is on-demand or single-serve coffee. Prepared in various on-demand brewing systems from Tassimo to Keurig to Nespresso and Nescafe’s Dolce Gusto, coffee for these machines has grown exponentially (141%) in the marketplace in the last year. “With single cup you have something that has dramatically changed the playing field in terms of cost per serving by a many fold factor,” says Sandy McAlpine, president of the Coffee Association of Canada. “I don’t think many people initially foresaw the at-home demand for these machines being so significant.”

According to the NPD Group Canada’s research, of the 2.2 million in-home coffee machines purchased in the past year, 23% were single-serve brewers. And who’s buying these machines? “It’s skewing heavily towards that higher income consumer overall and skewing higher towards the multi-member family,” says Robert Carter, executive director, foodservice at NPD Group. When the NPD Group asked consumers why they were motivated to purchase a single-serve coffee machine, the No. 1 reason given (by 55% of respondents) was “ease of use”; this was followed by “makes a coffee or specialty beverage in less than three minutes” (53%); “reduces waste” (40%); and “reduces cost of visiting a coffee shop on a regular basis” (19%).

And while the coffee drinking study reports that awareness of single cup brewers among Canadian coffee drinkers has reached 85%, Blenkiron notes some challenges for this format may be emerging. For instance, just 20% of in-home coffee drinkers surveyed said they think single-serve coffee is good value for the cost they have to pay for it and almost seven in 10 respondents said they think single-serve coffee packaging generates too much waste. Yet these reservations are certainly not slowing down the explosive growth occuring in the single-serve category. 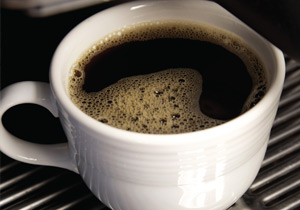 While the 2011 coffee drinking study finds that 68% of coffee consumers believe the quality of coffee now available in grocery stores is better than it used to be (up from 66% in 2010), there’s still room to improve. Coffee consumers, particularly those identified as “involved” or coffee-centric (and whose numbers are growing) are seeking greater choice in the coffee aisle. And with hot beverages outpacing cold ones, retailers should take a second look at their shelves.

“While beverage growth, overall, is static, there are a few key segments that retailers need to be paying attention to; hot beverages certainly being one of them,” says Peter Elgersma, group director at Markham, Ont.-based Nielsen. “Coffee is driving the bus in this area and I think we need to continue to leverage that and make sure we’ve got that space on shelf,” he says. “There’s room to justify a re-setting and a rebalancing and I would offer that if consumers in a limited shelf set are still managing to help coffee grow this much, imagine how much coffee would grow if given its fair share on shelf. There’s definitely more opportunities both for ourselves and for retailers and certainly for consumers to make sure they’re getting the products they’re looking for at retail.”