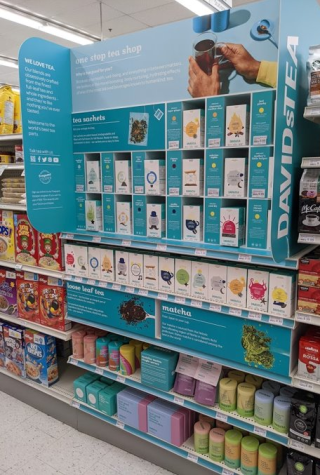 After closing almost all of its retail locations last year, DavidsTea will soon have more than 100 stores-within-store at Rexall locations across Canada.

“We know how healing tea can be, and with Rexall’s dedication to wellness, we knew this would be an authentic partnership for both brands,” said Sarah Segal, DavidsTea’s CEO and chief brand officer.

The DavidsTea in-store presence will cover about four feet and showcase 25 SKUs giving Rexall shoppers access to an assortment of ready-to-steep sachets, tins of loose leaf and matcha, as well as tea filters and sampler packs.

Once regarded as a made-in-Canada retail success story, DavidsTea was hit hard by the pandemic and had to drastically scale back its brick-and-mortar presence. It closed more than 200 locations across Canada and the U.S., leaving only 18 stores open for business.

The company, which launched in 2008, rapidly expanded its retail network through the 2010s, but struggled to make a profit and started to pivot toward online and wholesale later in the decade. That included a 2018 deal with Loblaws to extend its product and brand beyond its retail locations and into grocery store aisles.

That focus became more important when sweeping shutdowns in the early stages of the pandemic forced the company to close its stores and lay off most of its staff and eventually filed for creditor protection in July.

READ: DavidsTea granted court protection while it negotiates with landlords

The recovery plan has focused on leveraging its strong brand awareness by refocusing on its online and wholesales business.

In March of this year, it launched a pilot project with Rexall to offer its tea sachets, pre-packs and samplers in five Rexall locations, later expanding the presence to 46 stores in Central Canada. Now, 69 more locations will host the special DavidsTea showcases.

Since pulling back on its retail presence last year, DavidsTea has focused on e-commerce through its own DavidsTea.com site as well as through the Amazon Marketplace, and grown its wholesale customers to more than 3,300 grocery and pharmacy locations, while maintaining its own 18 stores.

“DavidsTea’s expansion to 115 Rexall locations is just the beginning. We see this as phase one of our expanded wholesale distribution footprint in a post-COVID consumer environment,” said Frank Zitella, president and chief financial and operating officer, DavidsTea. “As we look for new and innovative ways to accelerate revenue beyond our growing e-commerce business supported by our 18 flagship stores, we are confident we will secure and reinforce our position as leading tea merchants.”