The future of packaged foods is looking a little less bright.

In the coming year or so, Kraft Dinner cheese powder won’t have quite the same neon-orange glow, Trix cereal will have two colours of fruity corn balls missing and Froot Loops’ radiant rings might be a tad on the pale side.

It’s all part of consumer packaged goods companies’ plans to swap manmade hues for colours and flavours found in nature. Responding, they say, to a growing preference for healthy, natural ingredients, several CPGs have recently announced big commitments to take out artificial ingredients from their products.

To wit: Nestlé has pledged to remove artificial ingredients from all its 250 chocolate products sold worldwide by the end of this year. Starting in 2016, Kraft Dinner will get its orange hue from spices such as paprika, annatto and turmeric instead of artificial dyes Yellow 5 and Yellow 6. Kellogg, which makes Froot Loops, Special K and Rice Krispies, will cut artificial ingredients from cereals and snack bars by the end of 2018. And General Mills says by 2017, all its cereals will be free of artificial flavours and colours.

“, it’s all about listening to our consumers and making sure we stay in sync with what they want in their food,” says Emma Eriksson, marketing director of snacks at General Mills Canada. “No artificial colours and flavours is something they are looking for in their cereals, and it’s one of the top nutritional claims they’re looking for when they’re buying food overall.”

Today, roughly 60% of General Mills’ cereals are made without artificial flavours or colours, including Cheerios and Cinnamon Toast Crunch. The company is aiming for 75% by this January, including Reese’s Puffs and Trix; and 90% by the end of 2016.

For Trix, vegetable juice will be used for the red and purple colours, tumeric extract will replace yellow food dye, and annatto extract, derived from the seeds of the achiote tree, will replace orange dye. Likewise, Reese’s Puffs will use natural vanilla instead of artificial vanilla.

Cereals with marshmallows, such as Lucky Charms, aren’t so lucky after all, and will take longer to reformulate since their bright colours “are hard to achieve in natural ways,” says Eriksson. “We’re committed to working it out and finding solutions, but it’s a little more challenging than some of the other products.”

Reformulating Trix, which has a mix of six colours, was not without challenges. In the end, General Mills decided to take out green and blue because those colours were hard to replicate naturally.

“That’s probably one of the products that you will see a noticeable change,” says Eriksson. “We used to have six different colours and now we have four. And the colours are a little bit more natural versus bright.”

Whether or not natural flavours and colours make foods healthier is up for debate. Nicole Fetterly, a registered dietitian and former nutrition operations manager at Burnaby, B.C.-based Choices Markets, notes that artificial colour has been connected to attention deficit hyperactive disorder, though admittedly not enough research on that link has been done to date.

Still, many consumers will instinctively agree with this point from Fetterly: removing artificial colours will make products healthier because “the natural colours are coming from vegetable powder.”

READ: Kellogg to cut out “All Natural” labels on some Kashi products

“For the actual healthfulness of the food, I think you’re best off focusing on things like portion size, sugar content, fat content and salt content–just basic nutrition things,” he says.

Because some packaged foods aren’t all that healthy to begin with, Coupland says the question should be “do you want to eat this stuff anyway?” rather than making a decision based on whether or not it has artificial or natural chemicals added.

While some would say it’s a stretch to call sugary cereals and candy bars “healthy” or “natural” at all, the fact is, many grocery shoppers are reading ingredient lists a lot more than they used to. And they’re growing leery of unfamiliar ingredients they can’t pronounce.

“They don’t like chemical or complex names in their foods,” says Gary Augustine, executive director of market development at Michigan-based Kalsec, which produces natural colours and flavours for the food industry.

Augustine says the shift away from artificial ingredients is tied to the larger “clean label” movement, which means shorter, simpler ingredients lists.

“The desire for ‘natural’ has taken different forms. The problem is, nobody really knows what the definition of natural is,” he says. “The lightening-rod issue that people can get their head around is, no artificial ingredients. It’s clearly defined and it’s something that makes sense for them.” 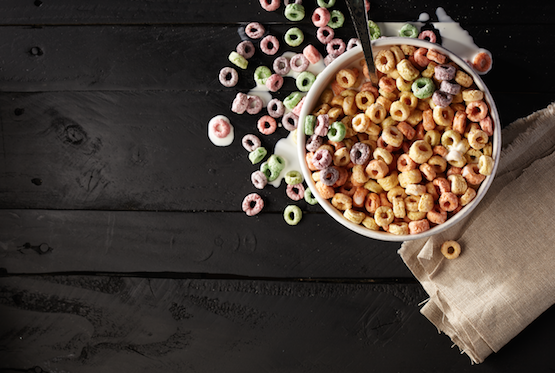 That might be the case, but will consumers really buy into the idea of less brightly coloured packaged food? “That’s going to be one of the challenges,” says Steven Morris, general manager of food colours for North America at St. Louis–based Sensient Colors, which makes both natural and synthetic colours.

“Consumers still want a pretty, vibrant product, things that are marketed toward kids, such as confections, cereals and fruit snacks. I don’t think people are going to compromise a whole lot on shade. Having those products that match up as best we can to synthetic colours is really important.”

Looking ahead, CPG companies will likely keep on trying to make their tried-and-true brands more “natural.” But does that mean grocery shelves will soon largely, if not entirely, be devoid of artificial ingredients? Not likely, given our fondness for good, old-fashioned junk food.

“There’s always going to be those people who don’t care,” says Fetterly. “They don’t want to read ingredients, they don’t want to be told something is good or bad for them. They want to buy the most inexpensive food they can find. I don’t think we’re going to shift the entire mindset of the North American audience.”

Even consumers who want to eat healthy seem to understand that removing artificial ingredients won’t make every food better for you. A survey of more than 4,200 consumers stateside by Instantly, a research firm, found that 72% of respondents believe that removing artificial ingredients would make cereal and cereals bars healthier. But only 16% say the same thing about candy and 37% for frozen dinners.

Removing artificial ingredients only ticks
one of the many boxes on most people’s shopping lists. One of the others is price–the most important decision-making factor among Canadian grocery shoppers today, says Sylvain Charlebois, a professor at the University of Guelph’s Food Institute.

The danger, he warns, is if companies that do away with artificial ingredients believe they will be able to charge more for the reformulated versions of their products. Then, he says, “people go back to regular products or they may actually trade down. I wouldn’t be surprised to see that.”

Another problem is that merely removing artificial colours and flavours won’t necessarily make a product all-natural and consumers may sense a marketing ploy if the ingredients list still contains unpronounceable names.

But regardless of those issues, it does appear a shift in consumer perception is starting. A 2015 Kalsec survey found that parents especially are keen on artificial-free products. The survey of 1,018 U.S. and U.K. consumers found that 83% of parents are more likely to buy a product for their children if it contains a naturally sourced colour instead of a synthetic colour. And seven out of 10 are willing to pay a premium for products containing naturally sourced colours.

So, perhaps the future of packaged goods will be pretty bright after all.