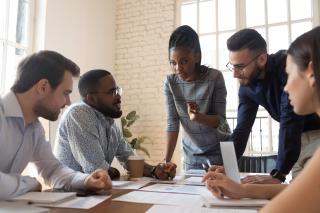 As employers put their diversity, equity and inclusion strategies into action, there’s a big focus on psychological safety—the belief that employees won’t be punished or humiliated for speaking up, sharing ideas, asking questions, or making mistakes at work.

Are their efforts paying off?

To find out how employees are feeling, ADP Canada polled more than 1,000 workers across the country this past March. The survey found that close to nine in 10 working Canadians are comfortable being themselves at work, and eight in 10 feel they can bring concerns to their manager or senior leadership team.

In addition, most employees say they feel valued at work, with 82% of respondents noting their unique skills and talents are used and appreciated.

“Having these indicators that most Canadians are feeling valued and comfortable at work, which reinforces the fact they feel psychologically safe, is really good news,” says Heather Haslam, vice-president of marketing at ADP. “We know that psychological safety... is critical. It’s important because it has the ability to impact so many aspects of the workplace, including relationships, career advancement, and the bottom line.”

While there were some positive results, the findings show Canadian employers still have work to do.

The data reveals racialized and Indigenous respondents are nearly twice as likely (36%) as white respondents (21%) to say they feel their colleagues may deliberately act in a way that undermines their efforts at work. This was particularly true for respondents in these groups who identified as men (40%).

In addition, nearly half (49%) of racialized and Indigenous workers agreed with the statement that making a mistake at work will be held against them. Respondents in these groups were also more likely (35%) to say it is difficult to ask colleagues or a direct manager for help.

“The fact that more than a third of racialized and Indigenous workers report concerns around being undermined in the workplace—so having less psychological safety—is really where the concern is,” says Haslam. “It’s important for employers to understand this and try to do everything they can to level the playing field and ensure everyone—regardless of their level, role or what type of work they do—is in an environment where they feel safe.”

Haslam says it’s important to recognize microaggressions—subtle or unintentional acts of discrimination—can occur in the workplace and psychologically impact employees, often leading to feelings of not being connected. “If [employers] understand microaggressions and those potentially unconscious biases, then they’re more likely to change them,” says Haslam.

It’s also important to create an environment that promotes open discussion and action around microaggressions, Haslam adds, as well as provide training, education and continuous improvement. And if someone is experiencing microaggressions, reinforce “the onus isn’t on them alone—you have to empower everybody to stand up and speak out. If you see something, say something.”