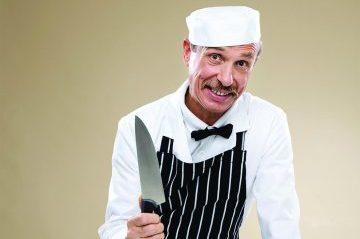 Meat butchers have always been a staple at supermarkets, but produce butchers? It’s a novel idea that just might have legs. After all, nobody likes to cry over onions, and who really knows how to cut up an artichoke or a dragon fruit, anyway?

Well, produce butchers do. The in-store service allows shoppers to get their fruits and veggies peeled, chopped and diced right before their eyes. More and more grocery stores are catching on. Upscale Toronto grocer Pusateri’s has free vegetable butchery at its flagship location on Avenue Road and at Saks Food Hall by Pusateri’s in the Eaton Centre. In the United States, retail/restaurant chain Eataly offers free produce butchery at its New York City and Chicago stores, and Whole Foods launched the service (for a nominal fee) at its new location in Manhattan.

“It is, in a word, genius,” says David Bartolini, principal at Toronto retail and brand consultancy David Bartolini Consulting. “It’s a fantastic value-added service, one that capitalizes on multiple trending fronts,” he says. Those trends include convenience, personalization (getting a one-on-one consultation with the butcher), customization (having your produce chopped the way you like it), and transparency (seeing the preparation of your food).

But what does Bartolini find the most exciting? It demonstrates that innovation doesn’t have to be complicated. “Whole Foods and Pusateri’s are simply repositioning a process that many retailers are already doing—the cleaning and the chopping—in the back of the store,” he says. “They’re creating transparency while adding value for the consumer.” The service is becoming a real differentiator with the potential to boost revenue.

When the Pusateri’s team started thinking about elevating the shopping experience in the produce department, differentiation was one of the goals. “Our meat counters are full service, our café is an Italian barista-style café and our pastry counter is full service,” says Angus McOuat, vice-president of merchandising and marketing at Pusateri’s. “But in our produce department, we didn’t have that extra service to help our customers.

“We think the vegetable butcher is a great way to engage with our guests, have better conversations around the product they’re purchasing, and provide them with an extra value-added service so they choose Pusateri’s over other stores.”

The strategy is paying off. McOuat says people are buying fruits and vegetables they wouldn’t normally purchase because they feel there’s too much preparation required.

On top of that, McOuat notes the Eaton Centre location attracts young professionals who may not have time to do a full dinner preparation. “Instead of grabbing a fast-food meal on the way home, they can cook a delicious meal for themselves,” says McOuat. “So we absolutely believe it has led to stronger sales, especially in that downtown market.”

Isabel Morales, manager of consumer insights at Nielsen Canada, says having produce butchers allows retailers to become an ally in their customers’ quest for health. “Anything grocers can do to help consumers achieve more healthful habits will translate into increased loyalty and consumer dollars,” says Morales. “A produce butcher is also an educator for different types of fruits and vegetables, and encourages consumers to try new things.”

Toni Abramson of YamChops, a plant-based butcher shop in Toronto, notes that sales of plant-based foods in the United States topped $4.9 billion in 2016. “Since opening our store two years ago, we’ve seen a huge increase in what we call flexitarians—people who are still consuming meat or animal protein, but are looking to reduce their intake and supplement with more plant-based options,” says Abramson.

At YamChops, customers can choose from a wide variety of ready-to-eat and ready-to-cook meals such as beet burgers, carrot lox and Szechuan “beef” wraps. Abramson says the shop is in talks with a couple of grocery retailers who are considering carrying YamChops products. “They want to carry more plant-based foods,” she says, “whether it’s proteins or nut-based cheeses, because they see a demand for it.”

This article originally appeared in the April/May issue of Canadian Grocer.