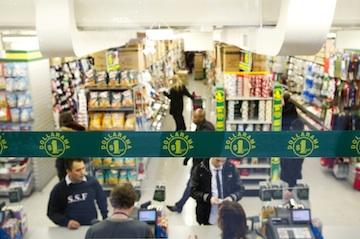 2013, MONTREAL WRITER JONATHAN LEMIEUX PUBLISHED A CHEAP-eats cookbook based on the three years he sustained himself mainly on dollar-store food.

The cookbook, Survivre avec une poignee de change (or translated: Surviving with a Handful of Change) chronicles Lemieux’s time as a student living the bargain-basement life.

It’s unlikely the dollar-store diet will become a fad. Dollarama doesn’t sell fresh produce or staples such as milk and eggs. But its solid offering of packaged food and household goods is an appealing option for budget-conscious consumers.

And based on Dollarama’s strong financial performance, the Montreal-based chain is taking a bite out of other retailers’ market share. Even Walmart.

While Q4 sales were dampened by Canada’s severe winter weather, Dollarama is on a clear growth trajectory. For fiscal 2013, the chain posted $1.86 billion in sales, a 16% increase from the prior year.

READ: With an eye on rivals, Dollarama looks to raise prices slowly

The category includes drinks, snacks, candy and other food products, as well as household products, cleaning supplies, paper, health and beauty care and pet food. All are items people would nor- mally buy at grocery stores or big-box retailers.

“ predictable low-price offer is a way for budgeting consumers to ensure they get the most for their food dollar, as well as being able to buy consumables at low cost,” says Wendy Evans, president of Evans and Company Consultants, a retail consultancy in Toronto.

Even when people don’t shop Dollarama for food, they’re buying high-margin goods such as cards, housewares and party supplies. And what’s Dollarama’s gain is a loss for Walmart, Target and supermarkets.

The Dollarama formula is finding favour with Canadian moms. According to Environics’ “The Modern Mom Report,” Dollarama is the fourth most frequented grocery-shopping destination.

While the survey doesn’t show how much moms are shopping Dollarama specifically for grocery, the company “is very successful in getting into the repertoire of stores used by Canadian moms,” says Robin Brown, senior VP of consumer insights at Environics Research. Although moms may not be doing their weekly grocery shop at Dollarama, they’re still frequenting the chain more often than Metro, Sobeys, Safeway or Loblaw.

In the U.S., dollar stores such as Dollar General and Family Dollar pose a bigger threat to traditional grocers, as they often sell perishable and frozen food. That’s made dollar stores a potential takeover target for big retailers keen to expand into smaller formats.

Stateside, Walmart has lost sales to dollar stores and is hoping to capture shopper fill-in trips with smaller formats such as Walmart Express and its c-store, Walmart to Go, which just opened, in Bentonville, Ark. A recent Credit Suisse report suggested Walmart should buy Family Dollar to jump-start its small- store effort.

On this side of the border, Credit Suisse says Dollarama could be a takeover target for Walmart and that a small- box concept could be worth pursuing. But Dollarama may not fit the bill since many of its stores are next to Walmarts or supermarkets, according to the report. Retailers that make more sense for a Dollarama takeover are Canadian Tire or U.S. dollar stores.

Retail consultant Ed Strapagiel says a takeover by Walmart isn’t likely. It would be expensive and, besides, Walmart is focused on improving its food offering against other grocers and battling Target. On the flip side, Strapagiel doesn’t think it makes sense for Dollarama to expand into fresh and frozen food.

“The way you make money on grocery these days is not so much on margin but on turnover and market share,” he says. “Dollarama wouldn’t have a huge market share.” Still, Dollarama’s strong sales should worry Walmart. “The top-performing Dollarama stores are near Walmart stores, so that tells you it’s the same customer,” says Alex Arifuzzaman, partner at InterStratics Consultants in Toronto. “If Dollarama does well, it means Walmart is losing some business.”

Walmart may be keeping an eye on Target, but in some categories, it looks like Dollarama is really the one to watch