Dollarama Inc.'s sales climbed by double-digits in its latest quarter despite some of its stores facing tougher retail restrictions amid rising COVID-19 cases, the Montreal-based retailer said Wednesday.

"Dollarama delivered another solid quarter," Neil Rossy, Dollarama president and CEO, said in a statement. "This is despite additional COVID-19 restrictions implemented in early April, including measures directly impacting retailers across Ontario."

He added: "Despite the near-term impact of COVID-19 restrictions, which remain in place, our solid momentum in the first two months of the first quarter reflects the relevance of our unique business model."

The Ontario government's stay-at-home order issued in April banned the in-person sale of non-essential goods, limiting purchases in brick-and-mortar stores to groceries, cleaning supplies and other essentials. The province has announced the ban will be lifted Friday.

The store, which sells a broad assortment of food, general merchandise and seasonal items, has 1,333 locations across Canada with about 40% located in Ontario.

Dollarama's results suggest that while customers shopped less often in the quarter, ended May 2, they stocked up and bought more items when they did go out shopping. For example, while the retailer's transactions dropped by 3.2% in the quarter, the average basket size grew 9.3%.

In light of ongoing pandemic disruptions, the company's results were solid and in-line with expectations, Irene Nattel, an RBC Dominion Securities Inc. analyst, said in a note to clients.

She pointed out that Dollarama had very strong same-store sales momentum of 15.2% in the first nine weeks of the quarter, results that were moderated by the highly restrictive ban on the sale of non-essential items in Ontario.

The discounter noted that the quarter was being measured against a comparable period last year marked by the onset of the pandemic.

Dollarama said it experienced a surge in transactions in early March 2020 as customers purchased higher volumes, but then recorded a sharp decline in transactions amid increasingly strict public health measures. 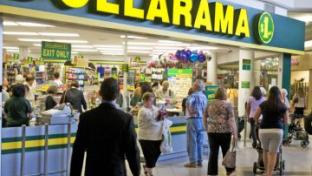 Despite a shaky fourth-quarter, the retailer's full-year results were solid 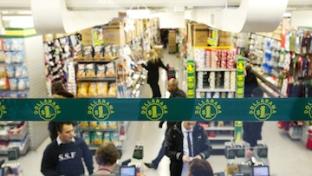