A few years ago, researchers at Yale University showed just how easily people are influenced by the sights, sounds and smells around them. As part of an experiment, students walking through the university's halls bumped into a lab assistant holding a pile of textbooks, papers and a cup of coffee. The assistant (who was in on the experiment) asked each student for a hand with the coffee. Some students were handed hot coffee; others got a cold cup. Either way, they only held the coffee for a few seconds. Then, in a lab afterward, each student was given a packet of information on a hypothetical person and asked to rate him. Almost without fail, the students who held cold coffee described the person as being much colder, less friendly and more selfish than those who held the hot coffee.

The Yale study was no fluke. Researchers around the world have found that people tidy up more thoroughly when there's a faint tang of cleaning liquid in the air. And they get competitive if a briefcase is in sight. What you should know is that these emotional sparks don't just happen in science experiments. They're occurring in your store right now.

When shoppers enter a store, they are expected to react completely rational. But they don't. Instead, they respond to a set of seven emotional command systems in the brain that are triggered by their surroundings. We all possess these command systems, but what may surprise you is that certain types of stores set off one type of emotion; others a completely different one.

We know this based on research my company, Fresh Intelligence, recently did comparing the emotions felt by 250 moms who all shop at least twice a month at four popular grocery stores in Ontario: Walmart, No Frills, Food Basics and Real Canadian Superstore (RCSS). We used an online psychotherapy questionnaire to uncover which of the seven emotional commands (based on neuroscientist Jaak Panksepp's 20 years of research) dominate in these women while shopping in the above stores. This is a new research methodology, called FreshShop.

So what did we find at the four stores? First, each store triggered significantly different emotional commands. RCSS shoppers had low-activated Fighter and On-Guard command systems (above). The first is responsible for freedom of actions and assertiveness; the other controls fear and safety emotions. It means that RCSS shoppers were more relaxed and didn't feel threatened during their trip. Only 20 per cent of RCSS shoppers felt enraged when the store couldn't satisfy their immediate needs, or when the aisles were crowded. Sounds good, but there's a downside to a low On-Guard system. It causes a shopper to be less loyal to a particular store.

At Walmart, we saw a different picture. The Fighter and On-Guard systems, which were low at RCSS, were high. The reaction of shoppers was completely opposite to that of RCSS's. Walmart shoppers exhibited strong beliefs in what I can best describe as the safety of their wallet, and this drove their loyalty and motivated them to return.

At Food Basics, shoppers became Explorers. Seventy-three per cent got a thrill from bargain hunting. They found the quest to uncover products and prices to be both playful and a learning experience.

Like Food Basics, No Frills is a discount grocery store. So you might think shoppers would react the same in both. But they didn't. No Frills shoppers exhibited a strong Energy system. Rather than bargain hunt, they were driven to complete the shopping mission. They had a shopping list, and as soon as they entered the store they quickly went through the list and got what they needed.

So what should we do with this information? Foremost, grocers can cater communication and in-store strategies to create a stronger emotional connection between them and an existing shopper. Walmart can benefit strongly from advertising products such as bread and baked goods that are more appealing to shoppers with a highly activated need for protection. Why? Because our FreshShop research found that safety-oriented shoppers are drawn to breads. (Yes, we can map a shopper's emotional blueprint by category and brand, too.)

RCSS should focus on communicating ease of access to all essential features of the store, easy navigation and offering a wide selection of products. Food Basics should implement experiential marketing tactics in-store and build lasting shopper loyalty by promoting relaxation and a unique variety of products. No Frills should think about one-stop shopping.

Speaking to shoppers' subconscious may seem complex, but it is actually a matter of common sense. For instance, advertising and in-store themes of family and friends will appeal to one of the seven emotional commands I haven't yet touched on: the Bonding system, responsible for parenting and nurturing. If you want to raise your ice cream and yogurt sales, Bonding is an emotional command system you should definitely tap into.

Imagine this to be like a massive therapy session with your customers. You never know what you are going to get or what you are going to have to solve until the outcome is revealed. The insights will enable you to implement an in-store strategy built on authentic human emotions, which, if satisfied, will undoubtedly lead to long-lasting loyalty–even if it's only your customer's subconscious that knows why. 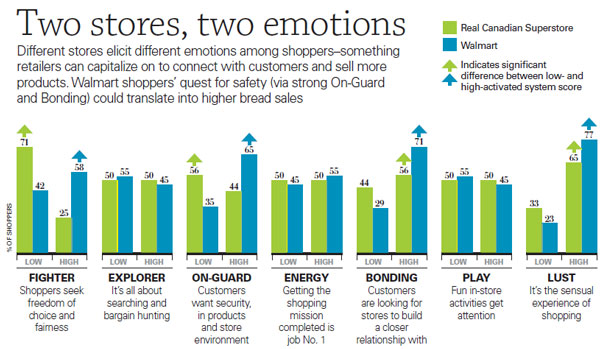