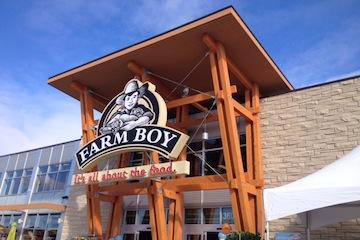 Empire is under-penetrated in Ontario's urban markets, but the company is betting on Farm Boy and Voilà, its e-commerce solution, to remedy that.

About a year ago, the parent of Sobeys scooped up Ontario-based grocery chain Farm Boy for $800 million. On a conference call with analysts on Thursday, following the release of its Q2 fiscal 2020 earnings, Empire president and CEO Michael Medline said Farm Boy was "outperforming  all of our expectations."

Farm Boy has been steadily expanding its footprint in Ontario, most recently with the opening of new location in Burlington, west of Toronto. Earlier this week it announced it would open eight more stores over the next two years, five of which will be in Toronto, with the others in the cities of Newmarket, St. Catharines and Ottawa. Medline told analysts the stores will range in size from a 12,000-sq.-ft. urban footprint to a 38,000-sq.-ft. signature store, bringing Farm Boy's store count to 37.

"And this is just the beginning," said Medline, adding that Farm Boy is in different stages of development on more than 25 new stores in Ontario, all of which is being supported by Empire's infrastructure along with real estate sourcing and logistics capabilities. "We plan to blanket the GTA and take market share from incumbents," he said.

Medline also shared details on the forthcoming Voilà service, referring to it as the company's "game-changing" e-commerce solution. While most players in the industry are focused on "inefficient" store-pick models to fulfill online grocery orders, Medline said Empire's focus is on building automated warehouses powered by the U.K.-based Ocado Group's grocery technology. He said the system will be flexible enough for customers to be able to place orders in the morning for delivery later the same day. He added that Empire plans to build on Ocado's infrastructure to make it even more flexible, over time, to meet customer needs.

"This is the only e-commerce model that at scale will eventually allow us to profitably deliver an expanded assortment of groceries to over 75% of the Canadian population with only four CFCs ," said Medline adding that although the company's focus is home delivery, it can also do click and collect in certain areas if that's what customers want. "Although I must add, our data and experience tell us that when given the choice customers overwhelmingly prefer delivery to home."

At scale, Medline said Voilà will offer up to 39,000 products, more, he said, than that of an other grocery e-commerce business in Canada. The service is on track to test and soft launch in the Greater Toronto Area in late spring 2020, he said adding that Empire was so confident in the Voilà solution that the company has already started construction on its second customer fulfillment centre in Montreal with its partner, Crombie REIT. The facility is expected to open in 2021.

"An online grocery home delivery experience like Voilà does not exist in Canada," said Medline. "We're going to grow the market."