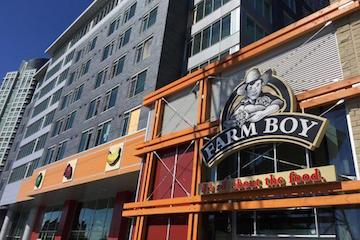 Farm Boy has gained a loyal following of shoppers over the years. Since it was first founded in 1981, the Ottawa-based grocer has been steadfast its strategy to carry locally-sourced, fresh foods, with an emphasis on natural and organic fare.

Some five years ago, Farm Boy began an expansion strategy aimed at taking the chain out of its Ottawa-area roots and into other towns and cities in Ontario, resulting in openings in cities such as Brantford, Pickering and London.

But Farm Boy’s is going back to its roots with its most recent store opening. Thursday morning, Farm Boy opened the doors to its newest location in Westboro—an area in the west end of Ottawa. The 19,000-sq.-ft. store occupies the ground floor of a residential building, making it the first urban concept store for Farm Boy.

“We want to grow the Farm Boy brand into urban centres,” Jeff York, CEO of Farm Boy told Canadian Grocer. “Our head office is here in Ottawa, so it makes sense that we pilot the concept close to home so we can work out any issues before expanding.”

York said he sees the Westboro store as a farmers’ market with an urban edge. “It’s very warm,” he said of the design. “I consider it boutique shopping on a mass scale.”

“Not having a parking lot in front of the store is a whole different mindset,” he added. “We had to incorporate a vestibule into our design including staircases and elevators.”

As with other Farm Boys, perimeter fresh departments such as produce, meat, dairy and HMR are emphasized. Selection includes more than 500 Ontario dairy products and over 300 varieties of cheese. It also features a 64-foot salad and hot bar

One of the highlights for York is a made-to-order pizza station, where customers can choose their toppings and have their pizza in-hand within five minutes. “We roll the dough right in front of them,” he said. He said the Farm Boy customer wants to know where their food is coming from, and working with local suppliers is key to Farm Boy.

Another priority for Farm Boy is hiring the right people, and York said staff can spend anywhere from four to six months learning the Farm Boy philosophy.

York said Farm Boy is actively working on 10 to 12 Farm Boy locations in the GTA, and anticipates rolling out the new urban concept to other areas of Ontario.

“The Westboro store is really going to be focal point for us,” said York. “We want people from the GTA to come and look at it, and to let us know what they think.”
Advertisement
Advertisement