It's no secret that Farm Boy has its sights firmly set on growth in 2018 and beyond. With 26 stores already stretching across Ontario, the Ottawa-based fresh food grocer has said it plans to open an additional 12 to 15 locations in the province over the next three years. Despite the grocery industry grappling with increased labour costs, changing consumer habits and the rise of Amazon, Farm Boy continues to thrive. 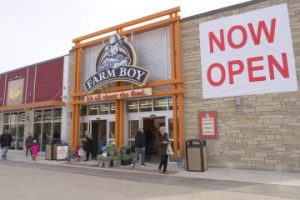 Farm Boy's co-CEO Jeff York shared some of the secrets to the company's success with Michael LeBlanc, senior retail advisor for the Retail Council of Canada, during a keynote session at the organization's Retail Marketing Conference in Toronto earlier this month. Here's an edited version of their conversation:

Farm Boy is family owned, but it's private-equity backed. Tell us how that affects the day-to-day and mid-term strategy.
We essentially have unlimited capital to do whatever we want. It’s a nice position to be in. Our biggest challenge is finding locations.

And your locations are interesting. You don't land yourself in what I would call a conventional high traffic location. Tell me a little about how you choose locations?
People think there’s a ton of retail locations out there that are desirable and the irony is, in Canada, there aren’t a lot of really prime corners left, so the prime locations are going to be prime locations forever and we're late to the market. When we go to Cambridge, for instance, we look for busy streets and we put a store in and they'll eventually find us. That's what we say: Farm Boy is worth finding. It's a destination.

Do you have an idea of what your trading area is?
A typical grocery store draws 2 to 3 kilometres.  We draw 8 to 10 kilometres. Again, we're worth finding. So when you come to a Farm Boy it's a food experience; you're not just going wandering aimlessly down the aisles finding products nobody buys anymore. We actually have products that people want.

And you're in a top-tier mall as well. You're in the Rideau Centre in Ottawa.
Yes, Cadillac Fairview had a problem and they don't usually have problems in their malls. They're the "A" malls that everyone is trying to get in, and they had a problem corner. We wanted to test the small footprint store <8,000 sq. ft.> so we said, "Why not? we'll pay you this much rent," they said yes and we opened the store.

You're opening up stores in different places and doing a mix between traditional and digital advertising, and then you're keeping up with changing consumer habits. How do you build a team that can support all that?
You hire great people and you hire curious people, people who want to change, people who want to adapt. Retail is an evolution. If you aren’t on a journey as a retailer, get out of the business because you have to learn in retail every day. I'm not even in my office. I travel all the time and look for ideas, integrating new things, looking at a store and it's not even food stores all the time. You have to connect with the customer and not on price, because if you're in the price game right now you're done, you're done, you're done. You can't make money in the price game unless you're the biggest. I came from the price game at Giant Tiger.  in the value game. What's your time worth? That's what I ask people. Then look at what we're offering. Put a time value on preparing food and then look at the value you get from a Farm Boy.

Retailers are, for one reason or another, experimenting with automation in the store, including self checkout.
Never going to happen at Farm Boy, by the way, ever. You should be thanked when you leave the store and they should smile and they should put it in a bag when you leave. That's just common courtesy. You're spending your money. We're never going to ask you to donate to Farm Boy. We don't do it. You're spending your money in our store and we thank you when you leave. We'll figure out mobile cashes We've designed our newer stores to have four restaurant-only cashes then six for . So we've adapted our stores, but that's the evolution of providing great service.