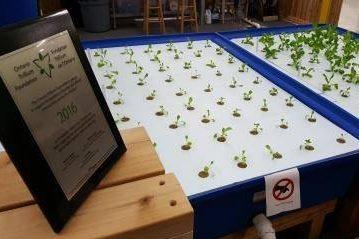 In a bid to make up for a shortfall of high-quality nutritious food, some Canadian food banks are growing their own produce -- and even farming fish.

The Mississauga Food Bank recently launched AquaGrow Farms, where tilapia is being raised in tanks and lettuce is raised through hydroponics, or without soil.

Executive director Christopher Hatch said the Ontario food bank was the first in Canada to be producing its own fish.

"It's not a complete solution, but it's certainly in the right direction and it shows the community we're thinking creatively about how to solve this problem," said Hatch.

There were just under 90,000 visits to food banks last year in Mississauga, Canada's sixth largest city with a population of about 720,000.

Donations of fresh food have been declining and higher food costs make it tougher to stretch donated cash.

"People tend to want to give us a can of soup and box of Kraft Dinner, which is fine, but we're trying to also source higher-quality nutritional value food," said Hatch.

Tilapia is raised in Mississauga food bank before it's packaged and processed off-site.
A couple of years ago he began exploring aquaponics -- which combines aquaculture, or fish farming, with hydroponics -- and thought it could be a viable solution to raise nutritious food year-round.

It takes about six months for tilapia fingerlings to reach about a kilogram in size, at which point they'll be sent off-site for processing and packaging. The first harvest is expected at the end of March.

The fish are the vegetable farmers, in a sense, as their waste, which is converted to nitrate, fertilizes the plants, says farm supervisor Colin Cotton. He's experimenting with growing buttercrunch and romaine lettuce.

"From seed to salad is about 60 days at the moment and we're trying to cut that down to about 45 days," he said.

"Every week we harvest 36 heads of lettuce and that goes out to our member agencies all across Mississauga. We're estimating in a year we can feed about 11,000 servings of lettuce so that's pretty significant for such a small setup.

Clients of a food bank depot in Surrey, B.C., part of metro Vancouver, will also be the recipients of leafy salad greens, thanks to hydroponic growing walls donated by Ethan O'Brien, founder and owner of Living Garden Foods.

During O'Brien's last semester in a sustainable community redevelopment program at Simon Fraser University, students were challenged to find an organization in the community to which they could provide assistance.

"I thought why don't we talk to some local food banks, see what their problems are and see if maybe there's an avenue where we could use vertical farming in the food bank to address food insecurity issues,'' said O'Brien.

Two growing walls, each about two metres high by four metres wide, are being installed at Zion Lutheran Church, which runs a food depot attended by about 80 families every two weeks.

One wall can support 80 plants and yield 182 to 272 kilograms of lettuce, Swiss chard, mustard greens, kale or collards annually.

Students attending an elementary school within the church will take on the responsibility of caring for the wall, says Marilyn Herrmann, executive director of the Surrey food bank, which serves 250 to 300 families per day.

The types of items available at a food bank at any given time fluctuate, Hatch and Herrmann said, so having a regular source of fresh salad vegetables, at least, will be helpful.

"I think people will appreciate the fact we're looking at ways to increase our donations and we're giving kids and a church an opportunity to really do something quite creative and supportive," says Herrmann.
Advertisement
Advertisement