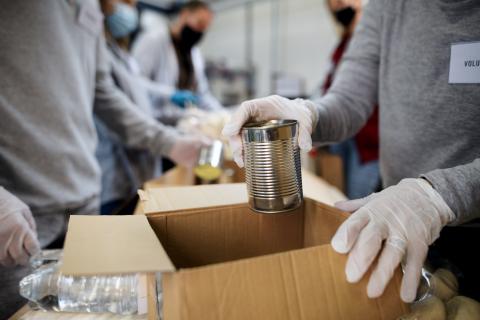 A growing number of Canadians are struggling to afford groceries as prices for basics like pasta, bread and meat all soar, a new survey suggests.

The poll from Food Banks Canada indicates hunger and food insecurity are increasing across the country, with lower-income Canadians hit hardest by inflation.

"It's really hard to hear just how many people in this country are struggling," Food Banks Canada CEO Kirstin Beardsley said in an interview Monday. "We found that nearly one in five Canadians report going hungry over the last two years."

The survey conducted by Mainstreet Research found almost a quarter of Canadians reported eating less than they should because there wasn't enough money for food—a figure that nearly doubled for those earning under $50,000 a year.

That means, when applied to the population at large, between 21.5% and 24.5% of Canadians may have eaten less than they should have because of food costs, while for those who make less than $50,000 annually, the portion could range from 38.5 %to 41.5%.

Beardsley said the majority of food banks are already stretched to their limit and this summer is expected to be the toughest in the organization's 41-year history, even taking into account the surging demand during the worst of the COVID-19 pandemic.

"Food banks have been on the front lines of the pandemic ... keeping their doors open, adapting their entire operations in order to make sure that people who have needed food had access to that food," she said.

"So we're heading into a tough summer at a time when people already have been flat out for the last two years."

Beardsley said the cost of groceries was also hitting food banks in a different way.

"Fewer people are in a position to donate because their budgets are stretched. They might not need a food bank, but they still don't have the money to donate food or funds to the food banks," she said.

Statistics Canada says consumers paid 9.7% more for food at stores in April compared with a year ago, the largest increase since September 1981.

Breanna Cordeiro of Oakville, Ont., said the rising price of gas combined with stagnated wages had left her family doing calculations in the grocery aisle.

"Where you look at budgeting, it's like, where can we make some cuts?" she said. "And unfortunately, sometimes it has to be food."

Her family is opting for more meatless meals, and stocking up on groceries based largely on what's on sale.

But even then, the mother of two said, it can be tough.

"The flyer comes out every Wednesday or Thursday, and it's like, 'This is on sale? This is the sale price? That's what you used to pay full price, even six months ago.'"

Mainstreet Research said the poll was reliable to within plus or minus 1.5 percentage points, 19 times out of 20.