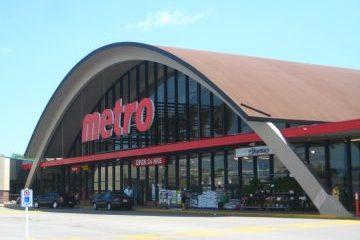 The Montreal-based grocery company had $132.4 million of net income in its fiscal second quarter, up from $124.9 million in the comparable period last year. Revenue was $2.9 billion, up less than a percentage point from a year earlier, but in line with analyst estimates.

“Same-store sales were up 0.3% (5% in the same quarter last year),” said CEO Eric La Flèche in his letter to shareholders accompanying today's results. “Our food basket experienced more deflation than in the previous quarter, at about 2% (inflation of 3% last year), which largely explains our modest sales growth.”

The company also confirmed it would acquire the rest of ethnic chain Adonis after buying a 55% interest in 2011.

In a call with analysts Tuesday morning, La Flèche reiterated the company was pleased with the performance particularly in light of the food price deflation, and said cost control was a key factor for its positive results. He also said Metro had renovated 14 stores this year, opened four new stores and is expected to open six more. He also said Metro is continuing to “gradually” roll out its e-commerce program.

“We think the worst is behind us, but we are still seeing deflating as we speak,” said La Flèche. However, he said produce was “coming back up a little,” and they expect deflation to ease later this year. “By the time we get to our fourth quarter we should get to flat or positive territory, but we don’t’ have a crystal ball.” Asked about the impact of deflation on competition in the quarter, he said there wasn’t a great deal of change though “promotional activity remains extremely aggressive.”

The progress on online shopping

Metro is in “phase one” of its roll out of e-commerce and click and collect programs. It will gradually expand the program in large cities in Quebec before introducing the service in Ontario. “So far, so good,” said La Flèche about the performance of the service to date. “The average basket that is sold online is clearly a bigger basket,” he said. “It is a customer driven by convenience, less by price, so it is a healthy basket.” La Flèche said the company was still looking at different options when asked to comment on possible capital costs required to expand the delivery service, and whether delivery would be handled in-house or by a third-party.

What now for Adonis?

It will continue to operate as a separate division, said La Flèche. “It is a good formula and we want to keep it growing,” he said. When Metro first acquired part of Adonis in 2011 there were only four stores; there are now 11 with a 12th slated to open in the spring of 2018 and expansion continuing beyond that, he said. “We are in a good position to grow at around a couple of stores a year for the foreseeable future.” He also said they would continue to introduce more Adonis products at its Metro banner. “I think it is a good differentiator for us and I think it will help us grow.”

The importance of ethnic markets

“Population growth, as we know, is mostly ethnic,” he said, so Metro would continue to differentiate from the competition with customization and merchandising strategies to better serve ethnic markets. A Food Basics in Woodbridge, just north of Toronto, has updated merchandising strategies to reflect the large Italian population, he said. They are planning to do similar roll-outs, though he was careful not to overstate how far they had taken the strategy. “To say we have a Chinese store and a South-Asian store and all sorts of ethnicities would be pushing it.”