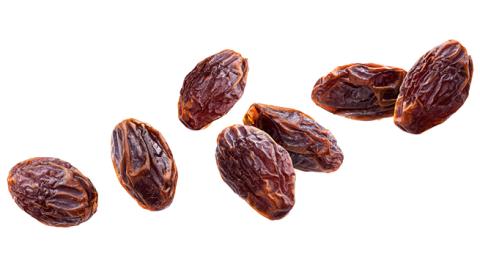 Dates – known for their caramel-like sweetness – are enjoying a renaissance, both as a fresh fruit and as a partial or full substitute for sugar in everything from snack bars to condiments. Whole Foods Market calls it a food trend for 2023. “Dates offer a natural sugar option that match the ongoing clean label trend,” says Lu Ann Williams, global insights director at Innova Market Insights. “They tick a lot of boxes that consumers are seeking.” The fruit of date palm trees, dates are rich in nutrients, says Kelsey Moore, nutrition operations manager at B.C.- based grocery chain Choices Markets. Their high fibre content is well known, but “dates also have more vitamins and minerals than natural sources like honey and maple syrup,” she explains. “They are a great source of magnesium, potassium and copper.

North American producers of the fruit have been partnering with influencers on dispelling the myth that dates aren’t sold fresh. “People are sometimes shocked to hear they aren’t a dried plum,” notes David Baxter, director of marketing at Bard Valley Natural Delights, which harvests and packages fresh Medjool dates from southeastern California and northern Mexico. This summer, Bard Valley Natural Delights partnered with celebrity chef Anna Olson on a harvest tour to drive awareness and education. “We are positioning dates as a companion to the savoury, like being bacon-wrapped or cheese-filled,” explains Baxter.

From snacks to ketchup

Once relegated to healthy cereals and on-the-go snacks, dates are now a hero ingredient in other products. Looking at the market share of product launches in the spreads category globally, three times more of them include dates than two years ago, according to Innova Market Insights. Its research indicates the category is also growing faster in its use of dates than any other (+43%, global CAGR 2017-2021). Ottawa-based Bisou is one of several chocolate and cinnamon date spreads available on Canadian shelves, including at Whole Foods Market stores.

In the sauces and seasoning category, Toronto-based Good Food For Good has recorded “triple-digit growth annually” since launching an organic ketchup –  “sweetened only with dates,” reads the label – in 2017, according to its founder Richa Gupta. Sobeys, Metro, Whole Foods, Loblaws, Walmart Canada and Choices Markets all carry it, and the company also has a line of barbecue sauces and cooking sauces sweetened with date paste. The brand has avoided an inflationary hit, having stocked up on organic dates more than a year ago. “It’s an expensive ingredient, but so far we’ve been able to avoid the impact,” says Gupta.

Dates became a viral sensation when TikTok creator and food blogger Hajar Larbah shared a recipe for chocolate-covered, peanut butter-filled dates during Ramadan in March. Her post attracted 2.8 million views. “That is when dates got their groove back,” says Moore of Choices Markets. “Once a food starts to trend on TikTok, it's generally followed by a huge sales spike.”

That was the case for packaged fresh dates at Choices Markets stores, though the category retracted between June and October. "There was a significant price increase on [dates] in the spring, and for most people, dates are a luxury item,” says Moore. The average unit price on dates rose by 13% for the 52 weeks ending Oct. 6, 2022, according to NielsenIQ. However, sales in the category were up 11% during the same period.