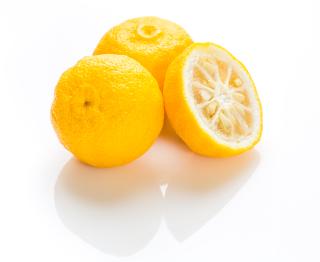 1 YUZU IS BUBBLING OVER

Yuzu has recently increased its profile on Canadian grocery store shelves with new products. One of the earliest offerings came from Quebec-based soda company 1642, which launched a yuzu soda in February 2019. “At the time, this flavour was not known by consumers,” says 1642 founder Bastien Poulain, who says his yuzu sodas are commonly purchased as a mixer to make cocktails and mocktails. Jo-Ann McArthur, president and chief strategist at Nourish Food Marketing, says yuzu appeals to “adventurous foodies as well as younger generations who love to travel and try new tastes from around the world.”

Yuzu is a tangerine-like citrus fruit that originates from Asia. “Imagine a grapefruit and a mandarin orange had a baby,” says Nourish’s Jo-Ann McArthur. When fully grown, yuzu is palm-sized and has a thick peel that’s firm and lumpy. It’s refreshing with a slightly tart flavour. While yuzu is believed to have originated in northern China, it made its way to southern Japan about 1,000 years ago and is now more commonly associated with Japanese cuisine.

Google searches for the phrase “what is yuzu?” are up by 800% in Canada since May. Nourish’s McArthur pinpoints the increased interest in this citrus fruit to a Loblaw summer campaign aptly titled “Do you yuzu?” “When I first tried yuzu, it stopped me in my tracks,” says Kathlyne Ross, vice-president of product development and innovation at Loblaw. “It had to be PC’s flavour of summer, and in every possible product.” The grocer developed a range of yuzu products for its President’s Choice brand, from chicken wings to hot sauce, cold brew coffee and Japanese-style cheesecake. Ready-made products such as the PC yuzu line are a great introduction for consumers new to the citrus. Once customers are familiar with it, grocers might consider stocking fresh yuzu in their produce aisles so they can experiment with it at home. But Nourish’s Jo-Ann McArthur cautions against placing yuzu directly alongside lemons. “Consumers will be confused as to the similar appearance,” she says. With sampling being a challenge during the pandemic, McArthur suggests listing tasting notes for customers so they can get a sense of what to expect from the fruit. For yuzu-based products that can also be incorporated into other dishes or beverages, like 1642’s yuzu soda, Bastien Poulain says recipes are a great merchandising tool. “It’s a simple way to promote how to use 1642 Yuzu,” he says. “Print a recipe and put it next to the product in your store. It’s easy and useful for your clients.”

The tart and slightly bitter aroma of yuzu is considered its most appealing characteristic. Like lemons, yuzu is used to flavour dishes, rather than eating its flesh like you would with oranges. Traditionally, yuzu peel is grated and sprinkled over meat and fish as a flavour enhancer. The peel can also be used to make marmalade or to garnish soups. Long distances previously made it cost-prohibitive to send and ship this Asian citrus fruit to North America, but increased interest in international foods and flavours has recently put yuzu in the spotlight here. Nowadays, you’ll see chefs of all cuisines incorporating yuzu into pastas, sautées and desserts. It’s an especially popular addition to beverages like cocktails, soda and beer. “It’s so flavourful—a little can go a long way,” Nourish’s Jo-Ann McArthur explains. “Because of its botanical notes, it can work well in both sweet and savoury product applications like cheesecakes, vinegars, dressing, hot sauce and even squeezed juice.”