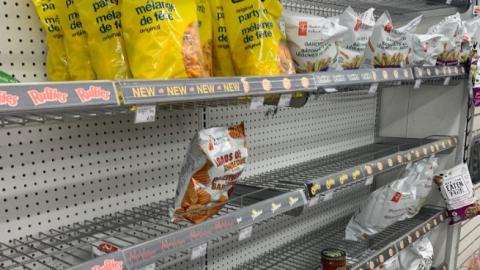 After a nearly two-month absence from the shelves of Loblaw-owned stores, Lays chips and other PepsiCo products should be reappearing this week now that a pricing fight between the two companies has been resolved—though the underlying industry-wide economic pressures that likely caused the dispute remain.

While neither side has provided much detail about the dispute, the triggering event was a price increase from PepsiCo in response to inflationary cost increases, and Loblaw’s unwillingness to pay the higher price at a time it’s committed to keeping consumer costs down.

Lays, Doritos, Cheetohs, and other PepsiCo products were replaced by store brands and other competitors, but on Friday Loblaw sent an email to its stores notifying them that the dispute had been resolved, according to the Financial Post, which broke the news over the weekend.

“All along, this was about providing value to our customers,” said Loblaw spokesperson Catherine Thomas, in a statement provided to Canadian Grocer.

Loblaw would not comment on specifics of vendor negotiations, Thomas said, but the company expected Frito-Lay products to begin shipping April 11 and its stores to be fully restocked before the Easter weekend. “We’re happy to have a wider assortment in our chip aisle once again, with a mix of new Canadian flavours and classic favourites, at varying prices to suit our customers’ needs.”

“We have now mutually resolved matters with one of our valued retail partners, and we thank our loyal consumers, our employees and our customer partners for their support through this challenging time,” said Frito-Lay spokesperson Sheri Morgan. She too declined to provide any details of the resolution. “We are committed to our Canadian manufacturing and operations and look forward to resuming distribution of our products from coast to coast in the coming days.”

While the chip squabble between PepsiCo and Loblaw has been resolved, it’s being viewed as an illustration of how relations between Canadian food retailers and suppliers have deteriorated.

In a column published here, food industry expert Sylvain Charlebois said the Frito-Lay-Loblaw rift was “long overdue, and it was only a matter of time before it became public. And make no mistake, many other manufacturers and other grocers are involved in a similar tug-of-war match.”

The high-profile skirmish also came as key industry players are working toward presenting to government their proposal for a new code of conduct intended to improve working relations between the two sides.

A new code may have helped in so far as it is intended to facilitate better working relationships between grocers and vendors, but it will not address the fundamental issue at the heart of the Loblaw-PepsiCo fight, said Michael Graydon, chief executive officer of Food, Health & Consumer Products of Canada.

“One of the things that code will not get into is pricing. That will remain a negotiated point between the manufacturers and the retailers,” said Graydon. “So this still may have happened.” And a code of conduct can’t do anything to ameliorate the larger macroeconomic forces behind the dispute.

“The supply chain impacts on costing right now are significant,” he said. “Whether it be increases in packaging, increases in ingredients—and that's food and non-food items—the increase in labor costs—which has been exasperated by COVID—all of these factors have contributed to virtually every manufacturer requiring pricing [increases],” he said.

But, a code that establishes rules and principles for fair dealing, contractual certainty and transparency might enable manufacturers and retailers to work together to mitigate similar disputes.

“Hopefully, what the code will do is enhance the relationship between the manufacturers and the retailers, to the point where maybe there are other avenues to find solutions versus the approach that had to be taken in this particular situation,” he said.