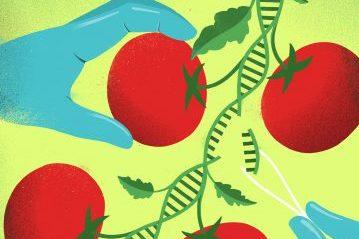 In the grocery store of the future, consumers might shop for tomatoes with the spiciness of a chili pepper, granola bars made with trans-fat free soybean oil, mushrooms that don’t turn brown, and bread made with low-gluten wheat flour. It’s not the stuff of science fiction, rather the next generation of biotechnology: gene editing.

How is it different from genetically modified organism (GMO) technology? With gene editing, scientists can make precise changes to the DNA of a plant, animal or other living organism, without necessarily introducing genes from another species. For example, a gene-editing tool called CRISPR-Cas9 can be used to slow down the browning of products like mushrooms and potatoes by “switching off” the gene that causes browning. GMO technology typically inserts foreign genes from one organism to another to introduce a new trait, making them “transgenic.” For example, some types of GM corn are mixed with bacterial genes for built-in resistance to pests or herbicides.

While gene editing isn’t new, new technologies like CRISPR have made the method cheaper and easier to use, and have expanded the range of what can be done. As a result, a number of new developments have made headlines in recent years. In the U.S., biotech firm Calyxt said it has already planted gene-edited soybeans that produce oil able to withstand high cooking heat without producing trans fats. It’s also developing low-gluten and high-fibre wheat. At Penn State University, a researcher developed an anti-browning mushroom said to have a longer shelf life that resists blemishes caused by handling or mechanical harvesting. And in Brazil, researchers are working on developing spicy tomatoes by “switching on” the genes that produce capsaicinoids (the compound that makes chili peppers taste hot), which already exist in tomatoes.

Proponents of gene editing believe the technology will revolutionize the food industry, saying it can boost nutrition, improve food production, reduce food waste and protect plants from harmful viruses. But for many consumers, the perception of GM foods as “Frankenfoods” still lingers. After years of consumer confusion and controversy over GMOs, will shoppers accept gene-edited foods, or view it as just another scary science?

“I think there is an opportunity for a different conversation here,” says Ian Affleck, vice-president of plant biotechnology at Ottawa-based Croplife Canada, a trade association representing plant science companies. He explains that the first wave of plant-breeding innovation through GMOs was focused more on the benefits to farmers, such as environmental benefits, rather than consumers.

“But those are hard to—pardon the pun—sink your teeth into,” says Affleck. “I think when the consumer is closer to the trait or benefit itself, it will help them be more interested in the technology, they’ll want to learn more and they’ll be more open to accept it. When you have something like a non-browning apple or a high-fibre wheat, now the consumer understands what these innovations can do for them, so it puts on a different footing.”

THE COMMUNICATIONS CHALLENGE
Sylvain Charlebois, a professor in food distribution and policy at Dalhousie University, agrees the technology is starting to serve consumers better, rather than just the agriculture industry. However, conveying that to the public is not going to be easy.

“Gene editing is not something most people understand, and if consumers don’t understand the technology, it will be very difficult for them to buy into it. That’s the challenge,” says Charlebois. “Market confusion is a hard beast to tackle. You have to deal with the GMO legacy that goes back 30 years now. And as soon as you mention anything that can’t be easily explained in 140 characters or less, it becomes very difficult for the industry to sell anything at all.”

How Canadians react to gene-edited foods could come down to which side of the debate has the most effective public relations campaign. Stuart Smyth, an assistant professor at the University of Saskatchewan’s department of agricultural and resources economics, says more than 90% of the Canadian public has no awareness about what technologies are being used to develop plant varieties right now. “So, depends on the communications that come from the agricultural industry, talking about how these varieties are developed that have improved previous breeding technologies,” he says.

“This is about an intervention in the genome and these are new products that continue to be hidden from consumers in the marketplace,” she says. “All of the environmental, safety and social and ethical questions raised by genetic engineering as it exists in our food system are also raised by the use of these new techniques.”

The question, she adds, is how successful will the biotechnology industry be in trying to reclassify gene-editing technology as non-GM with their public relations push “because there’s no reason to expect that gene-edited foods will be any less of a concern to consumers than other genetically engineered foods.”

At present, Canadian consumers are divided on whether they believe genetically modified or engineered foods are safe. In a 2018 Dalhousie University survey of 1,046 Canadians, 37.7% said they believe genetically modified or engineered ingredients and foods are safe to eat and 34.7% think they are not. The study shows that Canadians are concerned most about GMO fish and seafood, followed by pork, beef, poultry and dairy. They are least concerned about GMO fruits and vegetables.

There are mixed results on the health front too. While nearly 35% of Canadians believe that we understand the health effects of genetically modified or engineered food, more than 44% believe we do not. However, Canadians are overwhelmingly in favour of labelling, which is not mandatory for GM foods in Canada. Seventy percent of survey respondents strongly agree and 18.5% somewhat agree that GMO food and ingredients should be labelled on all packages.

TO REGULATE OR NOT TO REGULATE?
Andreas Boecker, associate professor, food, agriculture and resource economics at the University of Guelph, says even if consumers are aware of the difference between gene-edited foods and GMOs, the technique itself won’t make a difference in terms of consumer acceptance.

“When you look at the efforts of anti-GMO groups, they want gene editing to fall under the same regulations as transgenic products, or genetic modification,” says Boecker. That’s the case in Europe, where the European Union’s highest court ruled in July 2018 that gene-edited crops should be subject to the same stringent regulatory process as conventional GMOs.

The United States, on the other hand, is taking a hands-off approach to gene editing. Last March, the United States Department of Agriculture (USDA) announced it will not regulate plants bred with gene-editing techniques. In a statement, the agency said the new techniques “are increasingly being used by plant breeders to produce new plant varieties that are indistinguishable from those developed through traditional breeding methods.”

In Canada, the regulatory framework is based on the novelty of the food product, not the process by which the product was developed. All foods derived from GM organisms that exhibit a new trait, no longer exhibit a trait previously present, or exhibit a trait that falls outside the range of natural variation are considered novel foods. If a product is considered novel, a safety assessment is conducted by Health Canada, regardless of the method used to develop it (for example, conventional breeding or gene editing). In an email to Canadian Grocer, a spokesperson for Health Canada said the agency is not looking at making amendments to the regulations with regards to gene-edited foods.

However, in a presentation at the Organization for Economic Co-operation and Development Conference on Genome Editing in Paris last June, CFIA director Christine Tibelius noted: “Canada is committed to ensuring that new technologies do not face obstacles to innovation while ensuring sufficient oversight to protect public interest, and is consulting with value chain stakeholders to ensure that our regulatory system continues to perform well as new technologies emerge.”

And last year, Canada was also among eight countries (including the U.S.) that issued a joint statement in support of gene editing and the prevention of unnecessary trade barriers. “Government policies must continue to foster innovation ... and mitigate unintended, unnecessary barriers to the entry of agricultural products,” the statement noted.

Dalhousie’s Charlebois believes Canada will eventually follow the footsteps of the USDA. “We have a track record of following the USDA six months later or a year later, so I wouldn’t be surprised to see our own regulators here not making a big deal about .”

THE MOVE TOWARDS TRANSPARENCY
While consumer fears about GMOs may still linger, what’s different this time around compared to the backlash that started decades ago is that many biotech companies are pledging transparency. B.C.’s Okanagan Specialty Fruits is one company trying to avoid the stigma many consumers associate with GMOs. The company is the maker of Arctic Apples—non-browning genetically modified apples that took 20 years to develop and began selling at limited U.S. grocery stores last year. The apples were developed using RNAi—CRISPR technology wasn’t around at the time—which “silenced” the genes associated with browning.

Arctic Apples are sold pre-sliced in “grab-and-go” pouches, and on the back of the package there’s a brief story about Arctic Apples. It opens by noting that 40% of apples that are grown end up wasted, often due to superficial browning from bruising and slicing. It goes on to explain, “Using apples’ own genes, we simply ‘turned off’ the enzyme that makes apples brown when cut. Learn how we did it through biotechnology.” There’s a link to the company website and a QR code for more information. Grocery retailers are also provided with messaging and fact sheets so their staff can answer any questions from shoppers.

“We’re very transparent about it and that’s something we believe in very strongly across the board,” says Neal Carter, president and founder of Okanagan Specialty Fruits. “We’ve always been of the belief that educating the consumer around what we’ve done here is very important, and we want every consumer who buys Arctic Apple to know what it is.”

Carter says consumer reaction has been “awesome,” with research showing 92% satisfaction rates. “The consumer is pretty delighted by having a non-browning apple,” he says. “If we had started off with, let’s say, a re-blight resistant apple, there’s nothing in it for the consumer—it benefits the grower. We always felt to get broad-based buy-in by the consumer of this technology, there needed to be a consumer benefit.”

Arctic Apples were approved for sale in Canada in 2015 after a four-year approval process, and will launch here in the next few years as the company ramps up production.

FOOD FOR THOUGHT FOR GROCERS
Experts say we're two to three years away from gene-edited foods hitting store shelves, although CBAN’s Sharratt believes the promises for these foods are just hype. If and when they are sold in stores, grocers will have a lot to consider, particularly as the “natural” foods movement is going strong.

“We have that are talking to Canadians about how important it is to sit down together and have an authentic experience with friends and family sharing food,” says Sharratt. “And in that vision of sharing food together, we need to ask ourselves what place does genetic engineering have? What whole foods need to be protected as a space where people know they can find authentic food that hasn’t been genetically changed through this intervention in the laboratory?”

Croplife Canada’s Affleck says he has a great deal of respect for where the grocery retailer is in the value chain, “wedged between consumer preference and innovation. And the two don’t always align. But I think they can see that these innovations help both farmers and processors in the value chain, as well as consumers in the future.”