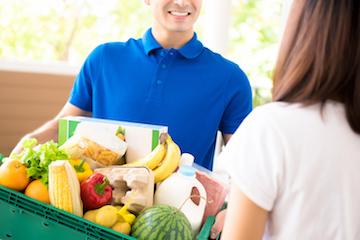 Canada's major grocery chains looking to boost their e-commerce offerings to stave off the impact of Amazon's entrance into the crowded industry are partnering with companies to give shoppers the option of home delivery.

Companies offering a range of home delivery solutions are now expanding across Canada, building robotics-filled warehouses, adding hundreds of jobs and hoping to prove their method is the best at serving a vast country with a relatively small population.

"There's no shortage of headlines. Every day, there's a new company making a new announcement," said Sarah Joyce, senior vice-president of e-commerce at Sobeys Inc., who has been in the newly-created position for about three months.

Instacart, a California-based online grocery app company founded by a Canadian, announced Tuesday it would transform its Toronto office into a tech hub and add 200 employees over the next several years. The office is set to open sometime next year and will be the company's second location to focus on research and development, with the first in San Francisco.

Last week, Food-X Urban Delivery Inc., a subsidiary of Vancouver-based Spud, announced it partnered with Walmart Canada to deliver groceries to customers in the Vancouver area. The big box store is Food-X's first major partner for its new warehouse designed to reduce the environmental impact of delivering groceries by reducing food waste and minimizing truck trips.

Sobeys, for its part, revealed earlier this year a partnership with the British Ocado Group to build a customer fulfillment centre in the Toronto area filled with robotics that can pick and pack customer orders. The centre will start delivering customer orders in the spring of 2020.

The influx of announcements came after Amazon acquired Whole Foods Market, which now has 14 Canadian locations. The move sparked speculation the company would bring its checkout-free store concept and AmazonFresh grocery delivery service to Canada.

That pushed the country's major grocers to introduce or ramp up delivery services of their own, with many choosing to partner with companies already operating in this niche rather than build expensive in-house services.

"That says a lot about where we are at as an industry and about this new era of strategic partnerships," said Daryl Porter, vice-president of omnichannel operations and online grocery at Walmart.

The company has opted for two different partners in different cities, a conscious decision that Porter said comes down to what value proposition providers offer customers.

Walmart's participating in a one-hour delivery pilot with Instacart in Toronto and soon-to-be in Winnipeg. Meanwhile, in Vancouver, it opted for a next-day delivery method with Food-X.

But Sobeys believes it's better to wait a little longer to launch, but offer a mostly automated experience.

Sobeys anticipates having up to four such warehouses in the country, which could cover about 75% of Canadian households.

Both Joyce and van Stalk admit their models don't offer one-hour delivery, but could do that or close to it in the future.

Quick delivery windows are Instacart's advantage and the company's partnered with Walmart and Loblaw to offer one-hour timeframes already.

" don't want to plan too far ahead for when they're going to have their groceries delivered," said Nilam Ganenthiran, Instacart's chief business officer.

Before Instacart, "groceries really lagged the rest of e-commerce," he said, but "the magic of Instacart" allowed people to open their fridge door, see what's missing and order online rather than rush to the store.

It's unclear which model will dominate Canada's online grocery industry, but for now retailers seem content to leverage the experience of the niche operators.

"We can learn from them," said Walmart's Porter, "and we are learning from them."