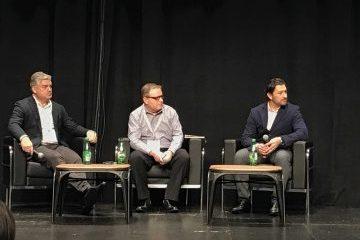 Attendees of Restaurants Canada's annual trade show and conference in Toronto heard oft-repeated advice from panelists during a speaker session Tuesday morning, but this time relating to the growing popularity of grocerants and home meal replacement: Know your customers, have a clear value proposition and deliver on your brand promise.

For example, customers of 7-Eleven convenience stores are looking for "the gift of time," said Mark Cousineau, the chain's national category manager food service. That means providing its core customer (males 18 to 35) with food, hot or cold, that can be consumed quickly and on the go. "They still look to us for immediately consumable, fast and on the go," he said.

So, what consumers will find at 7-Eleven is hot dogs, chicken wings, pizza, sandwiches and even fried chicken -- the latter of which is available at 230 of its more than 600 locations in Canada. Some of the food is prepared on site while other items are prepared at commissaries. " doesn't want HMR out of a convenience store," he said. "That's not what they use us for."

"When it comes to home meal replacement and how we define that, it's not what the grocery channel would be doing," he added. "We have to our customer what they want and they're very clear with us." They need to drive and eat at the same time, for instance, or head back to the office with a portable container and their food in tact, said Cousineau. 7-Eleven could try and chase after the "elusive" female customer in hopes she visits more often, but that strategy might not work, he said, so focusing on the customer it knows is more beneficial.

While all of its traditional brick-and-mortar stores are equipped with a kitchen, Longo's tweaks its offering based on the specific location, said Tony Cammalleri, Longo's director of culinary innovation. For instance, its urban concept store in Toronto's underground PATH network caters to time-starved professionals with a variety of ready-to-eat foods. Shoppers in that area are looking for smaller, hot meals because they don't necessarily have anywhere to heat up their lunch or store leftovers, he said.

Cammalleri said the grocer keeps track of what its customers want and what they're willing to pay. You need to "tailor the experience to customers in every area," he said. "That's crucial or you're not going to do well."

Instead of being defined by acronyms such as QSR or HMR, Farm Boy co-CEO Jeff York said the chain is focused on providing a great quality, affordable eating experience, which in the end is what shapes them. And, when you decide what you are and who you're serving, it's important to fully commit to that strategy in terms of the capital you spend, the people you hire and the overall way you conduct business.

The Ottawa-based supermarket chain decided eight years ago it would retrofit restaurants into its existing stores, and new stores -- like the first Toronto location that opened March 1 -- are designed around the restaurant. York said the biggest consideration when getting into the food business is "the capital and the venting. Getting heat out is very expensive."

7-Eleven encountered on-site issues with its fried chicken offering. Ventilation, health inspections and working with breading and batter was more challenging than anticipated. Essentially, you're outfitting the back of a store with a small restaurant, said Cousineau.  "All of those challenges we're facing head on and able to get over it in some cases, but not all cases," he said.

But 7-Eleven is changing with its customers, which is imperative in business. Farm Boy's York said his chain has "evolved into a food experience because grocery shopping is boring. Nobody does it anymore. That's why we -- to remain relevant."