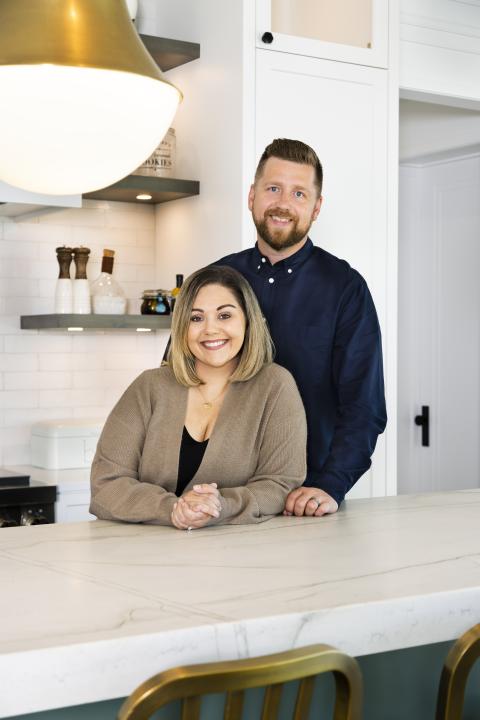 Jeff Lahey first met Alicia in 2008 when they were working as district sales leaders for snack giant Frito-Lay. But it wasn’t until 2012 that the two began dating and shifting their own grocery purchases towards organic and natural foods. “We saw there [wasn’t a] better-for-you option in a lighter, thin, crispy potato chip,” Alicia recalls. The couple thought it would be a great business opportunity, but it remained an idea sitting in the back of their minds.

Once their son, Wilder, was born in 2017, Alicia and Jeff’s perspectives shifted. “We started looking at a future that wasn’t really our own,” Alicia says. “What was this world going to be like for him?” At the time, Alicia and Jeff had moved to jobs at natural, organic food companies, but the products being produced were sold in plastic packaging. They were motivated to revive their potato chip business idea, and decided they would be sold in sustainable, plastic-free bags.

Alicia researched sustainable packaging companies to get a sense of the cost. “It was very expensive,” she says. “We would end up selling a bag of potato chips for $7 or $8. We knew that was just not possible.” She also reached out to a few organic potato farmers to make connections, but found they weren’t easy to get a hold of.

The Lahey’s idea was shelved again until January 2021, when the company Jeff worked for was restructured. At the same time, an organic potato farmer in Everett, Ont. responded (years later) to Alicia’s message and expressed an interest in working together. By this time, demand for sustainable packaging had grown considerably. “Prices were becoming more accessible,” Jeff says. “It felt like the right moment to go ahead and create Humble Potato Chips.”

A lot of pieces were put into play over the next few months. The couple worked with a company to make plant cellulose-based bags. “There are different layers of the packaging that are compressed together,” Alicia explains. For the chips themselves, they partnered with local Ontario potato chip veteran Ray Woody to hone in on the cooking process. And for the potatoes themselves, their partner farmer planted 50 hectares of potato seed into the ground in May 2021 for a fall harvest.

When it came to developing the seasonings for the chips, Alicia and Jeff had some help from a family member. Reinier Boermans, Alicia’s brother-in-law, is a chef at Dalhousie University’s agricultural college in Nova Scotia. “We would talk about what we wanted, and he would make different blends and ship them to us,” Alicia explains. “We worked with the students on campus to be our taste testers and give us feedback.”

The team narrowed it down to five flavours for their core lineup: original, sea salt and vinegar, smokey barbecue, honey mustard, and creamy dill. They found a production partner in Mississauga, Ont., got the facility certified organic and began production in January 2022. They launched in February to an impressive 500 stores, tapping their existing network of grocers to land national contracts with Loblaw and Whole Foods Market.

A week later, Alicia visited a grocery store to check on the bags and saw they had developed an unusual wrinkling. “We had a packaging fail,” Alicia recalls. “There is very low humidity in grocery stores – 10% compared to 30% or 40% in a home. In low humidity, one of the layers of our bags dried up, just like a carrot shrivels up when it gets dry.”

Although heartbroken when they saw the wrinkled packaging, the couple were determined to work with their packaging manufacturer to come up with a solution. “We made the bag thicker using some additional adhesive so it wouldn’t be as impacted by the humidity,” Alicia explains. The new bags were ready by March and performed well on grocery store shelves. By June 2022, they added Sobeys and Safeway to their distribution lists. And at the end of August, Humble Potato Chips could be found in 1,110 stores. Next year, Alicia and Jeff hope to introduce two more flavours and a smaller grab-and-go size to their lineup.

The couple is proud to have brought their vision to life. But when they think back to the company’s inspiration, their son Wilder, they’re grateful for the important lessons their company teaches him. “It’s given us the opportunity to talk to him about plastics, sustainability and why we compost,” Jeff says. “That’s been an incredible revelation for the family and for him, educating him on why it’s important to take care of the Earth.”