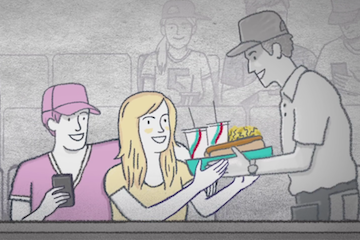 MasterCard has been hard at work reshaping itself as more than just a payments processor. From mobile “buy now” buttons to food ordering apps, it’s working on a whole range of consumer-facing mobile solutions, to draw merchants and consumers into using its digital payments platform. At a press demo this week, Canadian Grocer's sister publication Marketing got a look at several of the consumer apps that MasterCard’s innovation labs team are testing in Canada and around the world. The team was most eager to show off Qkr (pronounced “quicker”), a food ordering app that’s being tested in certain sections of the Air Canada Centre in Toronto. Using the app, you can order a hot dog or a beer from your phone. The order is sent straight to the food prep teams, and when it’s ready is delivered to your seat (which you can enter manually, or by scanning a QR code on your ticket). READ: Moneris brings next generation of mobile payment to Canada Qkr is a free app, and there’s no charge on transactions for the vendor or consumer. The main appeal for vendors is that if fans can order from their seats, they tend to order more. During tests at several Toronto Rock lacrosse games at the ACC this summer, sales volumes increased by five to eight times. Rather than a freemium play, MasterCard’s real goal with Qkr is to drive adoption of its digital wallet, MasterPass. MasterPass is integrated directly into the app, so you can sign up or sign in to access your stored credit card credentials in order to pay. That was a theme with a lot of the apps on display. For example ShopThis, MasterCard’s digital one-click ordering solution for mobile, allows readers to buy items they see featured in iPad magazine ads using MasterPass. In line with the trend towards instant mobile “buy buttons”that help merchants monetize mobile platforms, ShopThis is a button that magazines like Wired can add to selected ads on their magazines and sites. When the user taps, they’re brought immediately to a pop-up payment screen, asking for their MasterPass login. ShopThis is similar to PowaTag’s one-click buying solution for display ads, which Moneris introduced in Canada last month. Brian Lang, MasterCard’s Canadian president since March this year, said in the increasingly crowded mobile payments space, MasterCard’s strategy to drive adoption is to win over merchants and make them advocates for their services. To that end it’s focused on addressing pain points for merchants — like lineups at ball games and poor conversion rates on mobile product ads. More importantly, consumer-facing tools like MasterPass give merchants something to promote to their customers. “The way this stuff scales is if the merchant or the supplier feels it’s solving a problem, they’ll tell you should do this,” Lang said. The ACC puts up signs and has staff recommend that fans try Qkr, for example, because it’s a solution for them as well as for the end user. “Consumers in the end will make decisions as to what’s good and what’s not,” Lang added. So it’s still important that the tool meets the consumer’s needs. But it’s the merchants who hold the keys to large-scale adoption, and with so many different providers jostling for their attention, the one that adds value to their business is the one that will win out. This article first appeared on MarketingMag.ca