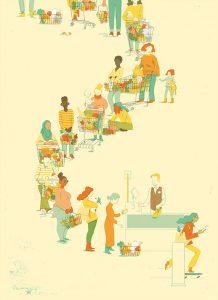 The headlines are as chilling as a frozen food section: “Amazon to Add 100,000 Jobs as Bricks-and-Mortar Retail Crumbles” and “Where Did my Supermarket Go?” screams the New York Times, while others chime in with “The Supermarket is Dead. Long Live the Supermarket.”

Though the demise of bricks-and-mortar grocery retail is surely exaggerated, there is little doubt conventional grocers are feeling the effects of unprecedented competition now coming at them from all directions. A growing online marketplace, warehouse clubs and mass merchandisers, cheap fast-food restaurants, convenient meal-kit delivery services, farmers’ markets and pharmacies with expanding food offerings are all taking a bite out of grocers’ sales. To these woes add the much-coveted younger shopper who finds supermarkets about as appealing as his father’s Buick.

To survive in a rapidly changing, fiercely competitive market, experts advise that grocers must enhance the in-store experience and employ new technologies to elevate shopping, pump up consumer loyalty and, ultimately, improve the bottom line.

Conventional grocers in Canada are certainly having a tough slog of it. According to Canadian Grocer’s annual Market Survey, the number of chain supermarkets grew marginally, but sales were down in many regions and, all tallied, the nation’s traditional grocers only managed a meagre 0.9% lift in total sales last year.

“Many people are asking, ‘Will supermarkets survive or will we do everything online?’ ” says Carlo Ratti, director of the Massachusetts Institute of Technology’s Senseable City Lab. “On the one hand, we will increasingly use digital services— ideally mobile apps—to purchase down-to-earth products such as toilet paper, laundry soap, milk, etc.,” says Ratti, who partnered with Coop Italia, Italy’s largest supermarket chain, at Milan’s World Expo 2015 to present Future Food District, a digitally-augmented supermarket. (The same concept was applied in real life to Milan’s Supermarket of the Future, which opened for business in December.)

“But on the other hand,” he continues, “I see a blossoming of ‘experiential’ shopping. Think about choosing fresh food produce: we will always enjoy going to a physical store where we can touch, smell, etc. Stores can become increasingly focused on providing us with unique experiences.” Ratti adds that the design of experiential supermarkets has never been as important and that, even if high-tech retailing becomes more prevalent, it doesn’t spell the end for physical stores.

Sylvain Charlebois, professor of food distribution and policy at Dalhousie University, agrees. “There is still a need for traditional food retailing,” he says. While clicking online for groceries is convenient, there are many consumers out there who will continue to find the smell of freshly baked bread, the extravaganza of colours in the produce section and the sensual necessity of squeezing a tomato or a melon too much to pass up.

For Milan’s Supermarket of the Future, the physical and digital come together in a state-of-the-art shopping environment. Featuring touchscreens within the aisles, shoppers can navigate through product categories to search for items, find product info and discover promotions. Tables filled with fruits and veggies are interactive by way of movement-detecting sensors; if a shopper picks up an apple, screens positioned above the table display key information on the fruit, including its origins, nutritional info and even tips for its disposal at home.

“Online shopping has made us addicted to data—so we need to find new ways to bring data to the physical world,” says Ratti. “In the future, we’ll be able to discover everything there is to know about the apple we are looking at: the tree it grew on, the CO2 it produced, the chemical treatments it received and its journey to the supermarket shelf. We can use technology to get a better understanding of the production chain and to have a closer, more personal relationship with the products we buy and eat.”

On this side of the pond, U.S. grocer Kroger is testing a so-called “digital shelf edge” project, the aim of which is to deliver a more personalized experience through sensors and analytics. According to the Wall Street Journal, shoppers can receive tailored offers via their mobile devices as they move through the aisles, and they can interact with small colour screens fixed on shelves to help them find products on their mobile shopping list. The retailer is reported to be expanding the pilot program this year.

Even online players recognize the value of providing a compelling in-store experience. Amazon, of course, grabbed headlines late last year when it announced Amazon Go, the online giant’s first foray into bricks-and-mortar food retailing. The 1,800-sq.-ft. test store in Seattle, Wash. features what Amazon touts as “the world’s most advanced shopping technology.” Seemingly the ultimate in grab-and-go convenience, the store boasts no lines and no checkouts—shoppers simply use the Amazon Go app to enter the store, then anything they pick up is added to their virtual cart and charged to their Amazon account upon exiting. The company explains that computer vision, deep-learning algorithms and sensors combine to achieve what it calls “just walk out technology.” Amazon isn’t revealing its plans for the format, but some reports say the behemoth will roll it out to 2,000 locations.

Scan and Go is another variation of checkout lane-free shopping. With Scan and Go, shoppers use an app to scan the barcode of items they add to their carts, pay for them via their mobile device, and then simply present their receipt to staff as they leave the store. Sam’s Club in the U.S. is currently using Scan and Go with its parent, Walmart, also testing the technology at some of its stores. (Walmart originally introduced Scan and Go a few years back, but abandoned it when customers reported the app too difficult to use.)

On a much simpler scale, many retailers are employing technology via social media to better interact with shoppers and drive them to their stores. Whole Foods, Tesco in the U.K. and Walmart’s Seiyu in Japan have taken to Twitter to open a dialogue with customers. Seiyu asked customers which products they felt should be sold for less and then lowered prices on 100 items for four weeks. Tesco asked customers for favourite recipes.

In some instances, stores are becoming drive-thru destinations. Going beyond click-and-collect, one Russian inventor recently filed a patent for a true drive-thru supermarket where customers can drive up to an available bay (something like a gas bar), select groceries from a rotating vertical shelf and place them on a conveyor belt that carries the items to a cashier for checkout. Voila! Shopping without the bother of getting out of the car. While the idea may seem a little far-fetched, who would’ve thought a few decades back that we’d be using phones to pay for groceries or that there could be stores bereft of cashiers?

Despite all the technological innovation and investment to help bricks-and-mortar grocers stay competitive, for a lot of retailer’s, it’s still a game of wait and see, says Stewart Samuel, program director at IGD Canada. Some are inhibited by the costs, and others, by their unfamiliarity with the technology. “As technologies gain scale, the costs will come down,” says Samuel. “There’s a lot of testing, a lot of prototyping… hard to say what’s a fad and what will be very useful.”

Without a doubt, however, traditional grocers that offer a compelling in-store experience will have an edge; after all, there will always be shoppers who want to smell freshly baked bread and squeeze those vine-ripened tomatoes. CG

This article originally appeared in the March 2017 issue of Canadian Grocer and was titled "The times they are a changin.'" Next issue we delve into the non-tech solutions traditional grocers are using to woo shoppers.