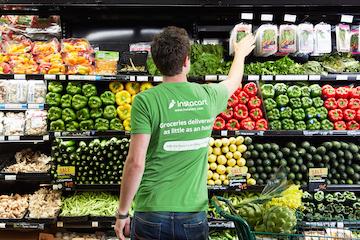 Instacart has rolled into the Quebec market. The San Francisco-based online grocery platform has launched in Montreal, where customers can order same-day delivery from around 25 Costco, Les Aliments M&M and Walmart locations. The service is available in English and French, marking the company’s first French-language experience.

Following the initial Montreal launch, Instacart plans to expand to Quebec City, Sherbrooke and Gatineau in the coming months, and introduce more retailers including Pharmaprix. Instacart is aiming to expand across the entire province and add more retail partnerships. With the move into Quebec, Instacart is now accessible in all 10 Canadian provinces.

“We have a very strong Canadian business and in the last year, we’ve continued to expand partnerships with our Canadian retailers... increasing our retail footprint by 35% across the country,” said Chris Rogers, Toronto-based vice-president of global retail at Instacart, in an interview with Canadian Grocer. “We’ve also increased our shopper community by about 150% in response to high demand. But we also recognize that demand for grocery delivery is universal across Canada. That’s why we want to launch in Quebec and deepen our commitment to Canada as the leading online grocery platform across North America.”

To access Instacart in French, customers must have the preferred language on their web browser or mobile app set to French Canada. An Instacart shopper will pick, pack and deliver the order within the customer's designated timeframe–whether they want to receive their order in as fast as an hour or schedule their delivery in advance.

In a press release, Costco and Walmart were among the retail partners that provided comments on the expansion.

“We’re thrilled to expand same-day delivery of Costco products to Quebec,” said Pierre Riel, senior vice-president country manager at Costco Canada. “By expanding our relationship with Instacart, our members will have even more ways to get the most out of their membership.”

“Expanding our collaboration with Instacart to the Quebec market is an important milestone in our commitment to making Canadians’ lives easier, more convenient and better,” said Cyrille Ballereau, regional vice-president at Walmart Canada. “We’re looking forward to providing our Quebec customers with additional express delivery options of our in-store selection of groceries and goods.”

In other Instacart news, Rogers said the company was in the midst of rolling out priority delivery with groceries delivered within 30 minutes. “Our goal is to keep building for the way that consumers shop,” he said. “People are particular about what they want and when they want it, and priority delivery is about helping us meet that need,” said Rogers.

The service launched in select U.S. cities last month and will be rolled out in other markets in the U.S. and Canada in the coming months.