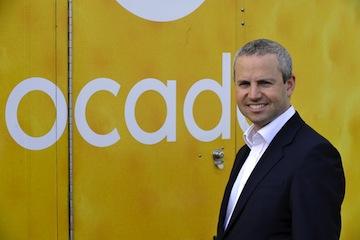 Thirteen years ago, Tim Steiner co-founded Ocado, Britain’s first and only online-exclusive grocer. As CEO, he’s grown the business into a giant.

But a burgeoning market doesn’t necessarily mean a fast buck. Ocado has about as many online competitors as most bricks-and-mortar stores have offline, including British grocery heavyweights Tesco and Sainsbury’s.

Thanks to the heavy investment required to stay ahead of its competitors in the race for capacity, Ocado hasn’t turned a profit since its inception.

But industry observers suggest a recently announced delivery and distribution deal with Morrisons, the only major British grocer without an online presence, may give Ocado the capacity it needs to get into the black. Steiner remains optimistic about e-grocery’s future and recently shared his thoughts with Canadian Grocer.

Who shops at Ocado and what do they buy?

The average basket exceeded 112 pounds ($174.23) last year, which is pretty much a full, weekly shop. Customers buy most, if not all, of their weekly grocery requirements and, increasingly, non-food items. Around 40% of our sales are fresh and chilled food, and we represent more than 5% of the organic food market in the U.K.

With any channel shift, there will be early adopters. In grocery they’ve tended to be wealthier and tech-savvy people who value service above all else. But now customers come from much broader demographics. Today, almost 40% of our new customers come from households with incomes less than 40,000 pounds (about $63,000). Ocado is increasingly appealing to the mass market.

Online as a whole is going mass market. It now accounts for 3.4% of the U.K. grocery business and is expected to double over the next five years. Why has it taken off in your country but not in North America?

There are many elements that support the growth of online. Customer demand is central. But to build a sustainable and profitable business, customer densities, smartphone and broadband penetration and speeds, as well as a reliable supply chain all become important factors. The challenge, as in all markets, will be how to best fulfil and service this demand, profitably.

Online isn’t an economically sensible activity for incumbent retailers to enter into. It cannibalizes the physical store in favour of the online store, and it’s more expensive to fill an online order using existing physical assets. As has been demonstrated in the U.K., using existing store networks is unlikely to be the answer.

Being exclusively online must have its disadvantages, too. Your rivals, such as Tesco, report surging sales through “click-and-collect,” where goods are ordered online and picked up at a store. Could you do something similar?

There are many locations where pickup points could be located without having to invest in real estate, such as independent convenience stores and gas stations looking to drive volumes away from supermarkets. There may be a value in click-and-collect for us, but this is about the price point it offers the consumer compared to that of home delivery.

There are still significant costs for running click-and-collect: You have all the costs of the traditional supermarket plus additional picking costs and costs of building and running separate click-and-collect pickup points. The winner would be the operator with the lowest fulfilment costs.

You’ve tested a virtual shopping wall that allowed passersby to scan goods’ barcodes and have the products delivered. Was this just theatrics, or is it the future?

We are always exploring new concepts to be ready to introduce innovations that might be sensible from a customer and an economic perspective.

Amazon already has 4% of the U.K. online grocery market, according to Kantar figures. What are its chances of cornering other burgeoning online markets, such as North America?

My understanding is that Amazon has a limited offering in grocery–mostly non-perishable items such as toilet rolls. The major difference is that Amazon does not own or control the last mile to customers , which makes full grocery a challenging service to offer.

Amazon has been “trialling” a fresh delivery business in Seattle for five years or so. That being said, the ability to order some bulky items online with Amazon may have some impact on more traditional bricks-and-mortar retailers.

How do you see online grocery growing over the next five years?

The tipping point will come when the prices online go lower than in stores. The growth of convenience food retail in the U.K. may well have been fuelled partly by online grocery shopping, with a top-up shop being bought from the convenience store to complement the main weekly shop bought online.

As more customers move online this will fuel demand for more convenience stores. The end result is further cannibalization of the bigger supermarkets and hypermarkets.