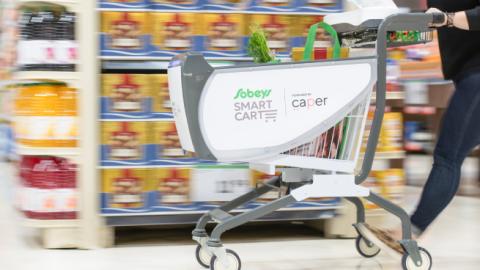 New options in cashier-less checkout are dramatically improving the grocery shopping experience. Here’s a look at key technologies in the works now

Mashgin, based in Palo Alto, Calif., is one of several companies perfecting next-generation self-checkout machines that use computer vision to identify and ring up items automatically.

Mashgin’s machines allow customers to check out in as little as 10 seconds, with an accuracy rate of 99.9%.

Already the technology has been successfully piloted in 500 Circle K stores with plans to install them in another 7,000 locations over the next three years.

Shoppers are asked to look into the system’s camera and the software estimates their age; if the system determines the person looks younger than 25, they can prove their age by scanning their ID.

A screen attached to a physical, A.I.-equipped grocery cart allows grocers to display product information as shoppers scan items they put into the cart; they can also apply coupons and pay without going into a checkout line.

Sobeys was among the first grocers in Canada to pilot smart carts at one of its Ontario locations and has since introduced them to Atlantic Canada. Amazon recently updated its Dash Cart so it is now capable of carrying more groceries and allows customers to wheel the carts to their cars.

Dash Carts are available in Amazon Fresh stores and made their debut at certain Whole Foods Markets in the United States this year.

Fully autonomous checkout technology (using computer vision) allows shoppers to identify themselves via an app or avatar when entering or exiting the store, and “grab and go” without checking out at all. In stores like Amazon Go, cameras, shelf and RFID sensors are used to detect the grocery items a shopper adds to their smart bag or cart and payment is made later through an app.

At French retail giant Carrefour’s Flash 10/10, a network of cameras on the ceiling are used to monitor shoppers as they move through the store. Each customer is allocated an avatar as they enter and the products they pick up are automatically detected and added to their virtual baskets. Once finished, customers pay at a contactless kiosk and have their receipt sent to them immediately.