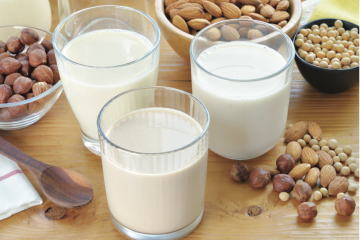 These days, you'll find a lot of “milks” to choose from at the grocery store. While some non-dairy alternatives such as soy, rice and almond beverages have been around for 20 years or longer, there’s been a recent profusion of new products including cashew, hemp, macadamia nut, quinoa, oat, flaxseed, pecan and coconut “milks.”

According to Nielsen, sales of soy, rice and alternative milks increased by 5% in Canada in 2017. Market research firm The NPD Group reports that consumption of dairy alternatives grew to 21 annual eatings per capita in 2016, up from 19 in 2013, while Statistics Canada reported that, from 1996 to 2015, the per capita consumption of cow’s milk decreased by more than 21%.

At Summerhill Market, a premium grocer in midtown Toronto, non-dairy alternative beverages occupy a fifth of the 15 metres devoted to dairy products, having expanded by 25% since 2015. Owner Christy McMullen says the quality and taste of the products have vastly improved. “Almond milk is the bestseller and pea milk is the up-and-comer,” says McMullen. “The category’s also growing with the addition of almond milk creamers and more flavours like dark chocolate.”

Some consumers turn to plant-based beverages because they follow a vegan lifestyle; some because they’re unhappy with industrial dairy farming practices; and some are allergic to, or have an intolerance to, cow’s milk. Then there are the health benefits: unsweetened almond milk, for instance, is low in calories and naturally rich in vitamins and minerals, while pea milk comes in at eight grams of protein per serving, and has 50% more calcium than dairy milk.

Millennials are also big consumers of non-dairy milks, says Greg Steltenpohl, CEO of Califia Farms, a producer of almond milk beverages. “Millennials are on a quest for great-tasting, clean-label beverages that contribute to wellness and are good for the planet,” he says.

“There’s a lot of innovation in the category,” agrees Michele L. Silbey, senior marketing manager at Nutpods, a Seattle-based manufacturer of dairy-free creamer. “There’s been growth in the types of milks available, including cashew, pea protein and combinations of nuts.” She adds that “barista blends,” milks that work well for specialty drinks, are also growing.

Ryan Dennis, director of communications at health food grocer Nature’s Emporium, notes that some consumers are simply looking for the next trend. “It’s a movement of curiosity; a social currency,” he says. “Food’s a part of that.” Each of Nature’s Emporium’s three stores devotes at least six metres to alternative milk products.

Some factions of the U.S. dairy industry have taken issue with the rise of non-dairy milks. Chris Galen, senior vice-president of communications for Arlington, Va.-based National Milk Producers Federation says U.S. dairy farmers are upset because of alternative milk producers’ presumed appropriation of a legacy product and label. After spending decades cultivating cow’s milk’s reputation for being a consistent, wholesome and nutritious milk product, some believe non-dairy milks should not be labelled as “milk” at all.

In January, the Dairy Pride Act, a bill that aims to remove the word “milk” from the labels of plant-based beverages, was introduced in the House and the Senate. If passed, it will compel the U.S. Food and Drug Administration to enforce the legal definition of milk as the “lacteal secretion” obtained by the “milking of one or more healthy cows.”

For their part, makers of non-dairy milks call this conflict nonsense, stirred up to detract from the dairy industry’s current struggles. “The milk lobby seems to want to point fingers at the plant-based milk industry as being the source of their problems,” says Michele Simon, executive director of San Francisco-based Plant Based Foods Association. “Our reaction to that is that there’s room in the marketplace for everyone.”

In Canada, it’s a non-issue; alternative non-dairy beverages cannot be labelled “milk.” The government’s Food and Drug Regulations states that milk “comes from the lacteal secretion obtained from the mammary gland of a cow.”

Grocers continue to respond to consumers’ ever-changing preferences, and for that reason, the non-dairy beverages category—no matter the words on the label—is poised for continued growth in the North American market.

This article originally appeared in the July/August issue of Canadian Grocer.