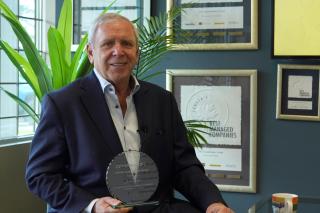 Anderson will be honoured this Friday as part of CPMA Fresh Week—the organization’s virtual trade show and conference.

Anderson has held various director-level positions within the produce industry both in Canada and the U.S., and has been recognized for his contributions with such awards as The Packer's Canadian Produce Man of the Year and The Packer’s U.S. Produce Marketer of the Year.

He joined OPPY in 1975, and since then has become a “leading grower, marketer, and distributor of fresh produce, generating a billion dollars in sales each year,” according to a press release announcing his win.

"John Anderson has been a pillar of the Canadian industry supporting regional, national, and international associations to better the marketplace for all,” said CPMA president Ron Lemaire CPMA, in a press release.

"Throughout his career, John has recruited many people to join the industry, including myself. Over the years he has been an advocate, a mentor, and a friend of CPMA, and I can think of no -one more deserving of the 2021 lifetime achievement award than John,” Lemaire added. “His legacy has been felt by many working today and it will continue to influence generations to come."