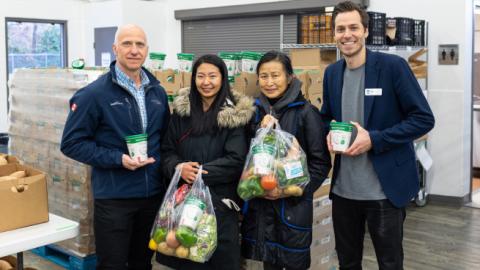 What: The company has donated more than 7.6 tonnes of Olympic Organic yogourt valued at $64,000 to Ontario and British Columbia food banks.

In British Columbia, Lactalis Canada will donate 3,900 tubs, along with an additional donation of 3,900 tubs from BC Dairy, the association representing BC's dairy farmers.

"During these tough economic times, we are proud to support many Canadian families with the all around benefits of highly nutritious dairy essentials such as Olympic Organic yogourt for the holiday season through our food bank donations in Ontario and British Columbia," said Adrienne Pagot-Gérault, general manager, Cultured & Yogourt Division at Lactalis Canada, in a statement.

The food bank recipients in British Columbia include the CityReach Care Society, Lotus Light Charity Society, Richmond Food Bank Society and Archway Food Bank. In Ontario, the yogourt will be donated to Feed Ontario, who will re-distribute the product to their partner food banks.