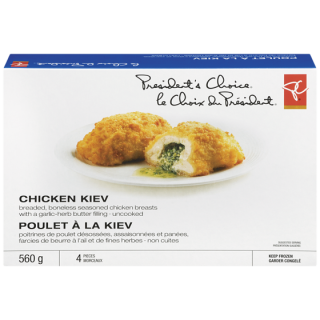 One of Canada's largest supermarket chains is taking a small but meaningful step to signal its support for Ukraine as the country defends itself against Russia's invasion.

Loblaw will change the name of its frozen President's Choice-brand chicken Kiev, a dish of breaded chicken breast stuffed with herbs and butter, to chicken Kyiv, using the Ukrainian spelling.

"The product is currently being updated, and we expect to have new ones on (the) shelf later this summer," says Catherine Thomas, vice-president of communications at Loblaw, in a written statement.

Russia's 2014 annexation of Crimea prompted the Ukrainian government to assert its own language and culture after years of Russian domination under the Soviet Union. Campaigns from the Ukrainian ministry of foreign affairs have largely convinced western governments and media outlets to refer to the country's capital as Kyiv, following the Ukrainian spelling, transliterated from the Cyrillic alphabet, instead of Kiev, which is the Russian version.

Though the language campaign has been focused on the city, not the dish, other players in the food industry have adopted the change since February, when Russian forces launched their attacks on Ukraine and created a humanitarian crisis.

One early adopter of "chicken Kyiv" was Ricardo Larrivée, a Quebec chef who has hosted his own cooking show for more than 20 years. His website changed its spelling of the dish recipe on March 2, less than a week after the start of the war.

"We are sensitive to the current situation and it was important for us to show our solidarity with Ukrainians,'' Nathalie Carbonneau, vice-president of communications at Larrivée's company, Ricardo Media, said in an email.

In calling the dish "chicken Kyiv," Loblaw joins several supermarket chains and food manufacturers in Australia and the United Kingdom that, following widespread calls on Twitter, have already changed their spelling.

Despite its name, chicken Kiev/Kyiv has neither Russian nor Ukrainian roots.

"It's a French preparation," says Darra Goldstein, professor emerita of Russian at Williams College in Williamstown, Mass., and author of six cookbooks, including two devoted to Russian (and Soviet) cuisine. "Starting in the mid-to-late 19th century, a lot of the aristocracy in Russia hired French chefs."

Yurii Kovryzhenko, a 38-year-old chef from Kyiv, points to a 1918 recipe from a restaurant in the city that he believes is the earliest chicken Kiev/Kyiv recipe. This version retains the bone of the wing, unlike the mass-produced, frozen varieties of chicken Kiev/Kyiv common in North America and the original chicken a la Marechale.

Loblaw says chicken Kiev/Kyiv sales have increased this year. Kovryzhenko also predicts there will be a resurgence of interest in Ukrainian cuisine after the war is over. His restaurants in Ukraine, which served food from all over the world before the war, now feed the nation's fighters.

"But I think when I return to Ukraine (after the war), I will open a Ukrainian restaurant again."